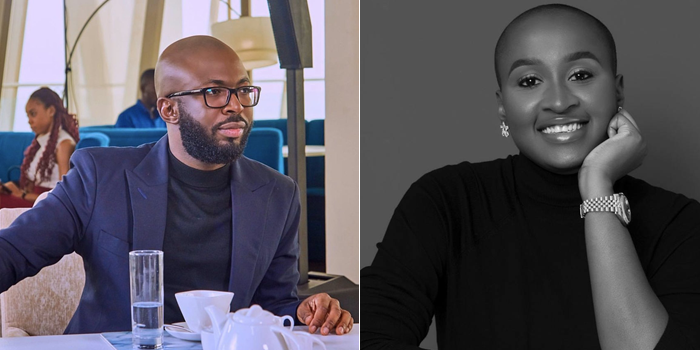 Popular Twitter feminist, Glory Osei, who was accused by several social media users and former employees of fraud and staff maltreatment has returned to the microblogging site after 35 days of silence and taking a break from her usual vociferous social media lifestyle.

Glory and her husband Muyiwa Folorunsho, founders of Divergent Enterprise – the parent company of a real estate firm LandLagos, PorkMoney and Hyberfactory and several other subsidiaries, were subjects of internet trolling on Monday 21 October, when several social media users who claimed to be former employees in the couple’s companies shared gory details of how they were maltreated, humiliated and fired after being denied their salaries.

In the heat of the uproar that trailed the allegations, Glory Osei and her husband became trending topics on Twitter Nigeria on October 21. Many also accused her of leading a Janus-faced lifestyle on social media by posing as a single lady despite being married to Muyiwa.

Glory who is popular on Twitter for her virile feminist advocacy and tweets suggesting she is against marriage had stayed off social media after sharing a short press statement as her reaction on October 21. She had since deleted the statement.

Staging an epic comeback on Monday afternoon in a three-part thread of 185 tweets that suggests she does not actually give a damn about the uproar and those who expressed disappointments in her Janus-faced lifestyle, Glory set tongues waggling again as Twitter users struggle to read the epistle-like thread.

Social media users are quite worried about her motive for posting 185 tweets in two hours.

In the first part of the thread where she addressed her marital status, she called the bluff of those who claimed they were looking up to her as a mentor.

She, however, claimed that she never liked the idea of marriage.

“Let’s talk relationships and marriage.  I have never liked the idea of marriage. I love the person I married but quite frankly, “he was a good excuse to leave my parents and he is also good to look at. He was like me too in that he wasn’t into the idea himself, but he loves me and we went ahead to rid ourselves of family on our back. Our marriage was a good excuse to continue with the lives we always dreamed of. I heard you guys were mad MAD because I am married. Apparently I give “single girl” vibes ? FUCK ALL OF YOU!”

This is the thread that has thrown Twitter into a frenzy:

“PART ONE. “The collective intelligence of a mob is less than that of a toddler or the early man or a tadpole”

1. You know, I thought of making this into a book. I mean. You all live for tea don’t you. Like literally, I mean you would literally fall ill and die if you had only your lives to face, so much so that you have to create fictions about others. The worst part of your fiction

2. just like the bulk of your movies and your art is how lacking in imagination it is. How about some truth. It’s not going to be nice. You guys killed nice Glory, this is fun Glory now. Bald head and turtle neck glory. Pull out your d*cks bitters and dusties,

3. this is the porn*graphy you have all been waiting for. Hello y’all. How are you doing? I can see that you are all happier, richer, more fulfilled. I hope you have light now, and SARS, I hope they finally doff their hat when they see you. I can see the roads no longer have

4. pot holes and the government is finally for the people. Nigeria is no longer the poverty capital of the world and all you are now profitably employed and even have very successful businesses. This is great. Ah, yes, it is me from beyond the grave. Yes.

5. Where you hoped I would be. OR was it jail? I can’t be too sure this days. It is I anyways, here to tell you that your life is still pitiful and your bile for me is only temporary relief from your very dreary existence. The last time “I” encountered the mob was in 2014,

7. always been first a business, a profitable one, one you can take to the bank, quite literally. Don’t worry this is not my love story, you are not worthy of anything but the gossip you scrape together from the dust piles of the internet. Now back to the mob.

8. Yes. My first encounter with the mob was in 2014. Nigeria wasn’t this desperately poor then. The dollar was still N195 and my biggest ambition was to buy a Dominica passport. A very big ambition given just how poorly we were doing. Like every business

9. without funds starting out the goal was quite simply to survive one month at a time. Our sales staff at the time had all agreed to be paid a commission on sales. What can I say, I truly am an employer from hell. And like all systems that require accountability the 80/20

10. rule came to play with a very few earning the lion share off how efficient they were (Hello Jaji, you are a darling). We were struggling, I mean, not like you struggle everyday, a different kind of struggle, the struggle of a person with greater ambition than their

11. current situation. I could eat and drink and travel once a month flying economy, but by God that was a god awful time for me and mine. We did everything. The Jewellery business was very hard. From the suppliers in china to the staff, to theft, to some logistic lady in

12. some popular logistics company stealing our money and products, we found it very hard to actually grow. But try we did and we did without tiring. And then Ebola happened. Oh boy. We were scared. My partner was probably the most paranoid about the whole thing.

13. He had a hunch that this Ebola thing was going to wipe out a good chunk of the country. We weren’t having it. So we ran off to the only country we could afford to go to on a short notice with a Nigerian passport- Ghana. I guess that trip started my journey to being a

14. travel blogger. Any who… Before our trip we had a meeting with the staff. Now understand that only the sales staff at this time where on commission. Every other person was paid a full salary. We called them together, met with them, pleaded with them like we had been

15. doing a month earlier about the need for our N3,000,000 to N5,000,000 in revenue small earrings and necklace e-commerce company to include Saturdays for half days for a chance to improve our chance for growth. Every time we would agree, but come Saturdays, like

16. clockwork they all came up with excuses. So this time around we sweetened the deal. It was a negotiation and we shook on it. This was around the Ebola time and we went to Ghana. We were in Ghana for 3-4 weeks. Monitoring everything via phone and email reports.

17. It was a crude system but we made it work. Sales plummeted as expected. It was bad. It was as if the more incentives we gave the less they felt they wanted to work. What can I say, I was young and dumb and assumed people if given an opportunity to improve their lives

18. and their conditions would take it with both hands. My assumption had hit the hard reality that was the determined to be lazy Nigerian youth. Buhari was not kidding, he hit the nail on the head, the leader you all deserve. I should make a shirt out of his handsome face.

19. Okay. Back to what I was saying. So, sales plummeted and the people went from giving excuses to not even bothering. We had some very good people. They were the few who basically carried the whole company on their backs with their results. They made me hopeful.

20. First Saturday. No one showed up. Our manager at the time, a most incompetent dolt who is most definitely making come company’s bottom line suffer gave an excuse about the social media manager being ill. At the time, given how we were wholly dependent on facebook

21. for sales it would honestly have been pointless for anyone to show up without the guy who manages the facebook ad. Let me explain why this is important for those who don’t know how facebook ads worked for small income persons like us. We only ran the ads during working hours

22. , as we were very certain that running them without having to see and manage the people for whom the ads were run would most certainly mean that we were throwing our money away. We couldn’t afford to throw money away.

23. Second Saturday. No one showed up again. The commission increase was already in effect and this guys were not holding to their end of the bargain. We were still in Ghana and our response was limited to what we could say on the phone. We were livid but decided it best to play

24. down the insubordination lest they all get mad and cart away our goods as we were very certain they could do. What can I say, we really hired a lot of terrible people, to be frank, the best people were not very interested in working in Ikorodu, getting diamond there was very.”

26. spoken he with body odour, but hey, we were in Ikorodu with a small office and a noisy generator, we couldn’t be choosy. Third Saturday. You guessed it. No one showed up. It was clear to us at this time that this people had basically formed a union. They were resolute