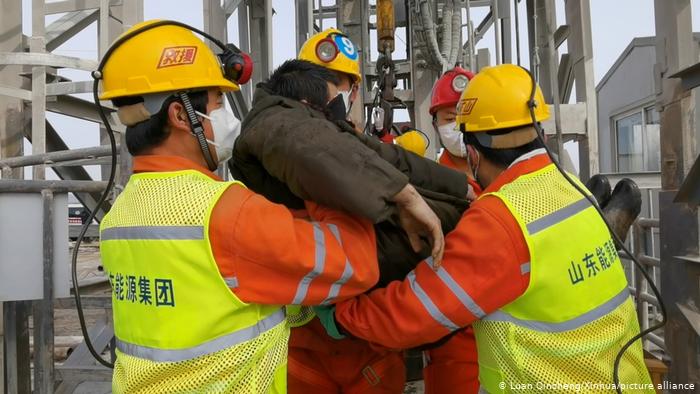 Rescuers have retrieved the bodies of 10 miners trapped underground following a gold mine blast in east China’s Shandong Province.

A total of 22 miners were trapped underground due to the mine blast on Jan. 10 in Qixia under the city of Yantai.

Eleven miners were rescued on Sunday after being trapped for two weeks, and one remains missing, according to a news conference on Monday.

“We will not stop searching for the missing miner,’’ said Chen Fei, mayor of Yantai, adding that the rescue work is extremely difficult as the underground water is very deep.

The blast occurred at about 1:15 p.m. on Jan. 10, accompanied by thick smoke and strong tremors.

At about 2:45 p.m., a second explosion was heard in the shaft which caused severe damage to the underground facilities and greater difficulties for clearing work, according to Chen Yumin, who is leading the rescue team.

“The bodies of nine miners were retrieved from about 420 meters to 500 meters underground, indicating they were killed by the second blast as they tried to escape following the first explosion,’’ said Chen.

The 10th victim was found at a different location.

The 11 rescued miners are receiving appropriate medical treatment, and DNA tests are being conducted to confirm the identities of the deceased, according to Chen.

An investigation into the cause of the accident is ongoing.