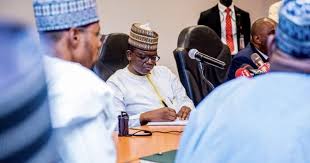 Dr. Nuruddwen Isah, the state’s Commissioner of Environment, issued the warning on Saturday when he visited one of the suspected illegal mining sites at Sauna village in Talata Mafara local government area of the state.
The Newsmen reports that the government’s warning followed an allegation and complaint by the Director of one of the licensed mining companies, Shamsudeen Sani.
Sani alleged that the sole administrator of Talata Mafara local government area had mobilized machinery and was allegedly excavating precious stones on his (Sani) site.
The commissioner warned
all miners to as a matter of public importance, desist from engaging in mining activities in the state since the Federal Government has not yet lifted the ban imposed 18 months ago on all mining in the state.
Isah further said that no one had any right or claim over any area of the mining site, adding that his visit to Sauna village was to enforce and ensure that nobody was on the mining sites.
“If anybody dares go to any mining site, the person will be arrested as stipulated by the law,” he said.
He assured that if the mining ban is lifted by the Federal Government, all mining activities would be subjected to scrutiny to guard against it being used by bad elements within and outside the state.
“We also have a committee that is set up by the federal government to ensure that no one goes to any site without being authorized by both the state and the federal government,” he said.
Reacting to the development, the Sole Administrator of Talata Mafara, Alhaji Abubakar Musa who accompanied the commissioner to the site denied the allegation.
“l just heard that somebody said the sole administrator has taken over his site to my surprise,” Musa said.
It would be recalled that the Zamfara based licensed miner, Alhaji Shamsudeen Sani recently alleged that the sole administrator had trespassed into his mining site in Sauna village and was carrying out mining activities.
Sani challenged the sole administrator to name the owner of the excavator and mining laborers who was carrying out illegal mining on the site despite the federal government’s ban on mining activities.
“If it is not the sole administrator who brought the excavator and other mining equipment to the mining field, then the excavator and other equipment should be seized and the owner arrested and prosecuted,” he said.
Sani, therefore, urged the state government to as a matter of justice called on the sole administrator to stop the illegality since he was not the owner of the property.
He explained that his company, Metro-bright Merchants Limited was given an exploration license by the Mining Cadastre office (Federal Ministry of Mines and Solid Minerals Development) in 2017 and renewed in 2020.
“We have a license but because of the ban on mining by the federal government, we are not doing anything on the field at the moment only for us to realize that the sole administrator is using his position to carry out illegal mining with the pretex of providing security,” he said.
MORE READING!  Ondo election: Sensitive materials to arrive Akure Oct. 5 – INEC
Related Topics:illegalZMSG
Up Next