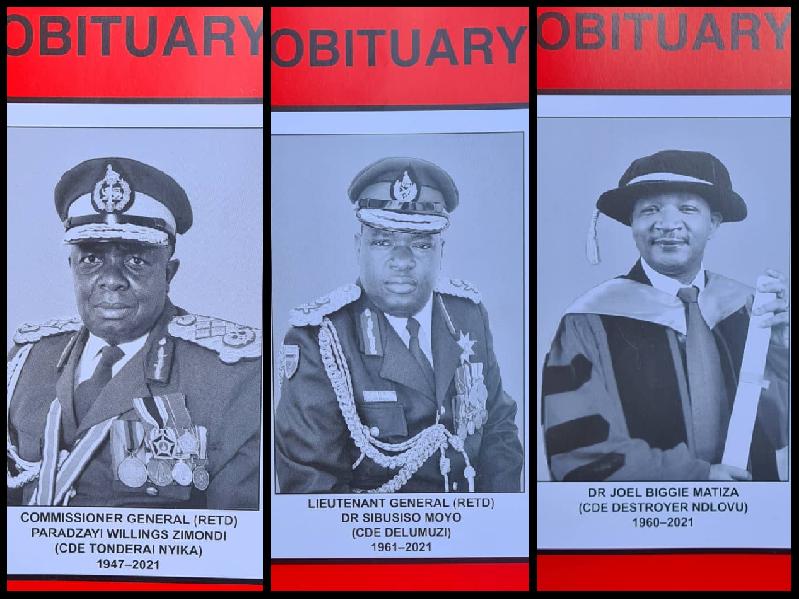 Zimbabwe’s Foreign Minister, Sibusiso Moyo, is among three top government officials being buried at the Heroes Acre in the capital, Harare after they succumbed to the Covid-19.

The country has recorded a surge in Covid-19 cases since the festive season.

The ministry of information has tweeted photos of the ceremony.

Dr Joel Biggie Matiza was the ZANU PF Mash East Provincial Chairman & Minister of Transport and Infrastructural Development. Born in 1960 in Murewa, he joined the liberation struggle in 1975 and was deployed to various ZIPRA training camps. He was known as “Cde Destroyer Ndlovu”. After suffering injuries during a raid on Freedom Camp in Zambia, Cde Matiza was hospitalised for a long time before being identified as one of the intellects in the ranks qualifying for educational courses offered by friendly nations. He was sent to Nigeria to pursue his education

Post-Independence, Cde Matiza worked as an architect before being employed by the Urban Development Corporation. He went on to hold several portfolios in ZANU PF and Government. He will be remembered for championing infrastructure projects in the country with passion.

Commissioner-General (Rtd) Paradzayi Willings Zimondi whose nom de guerre was Cde Tonderai Nyika, was born in 1947 in Uzumba, Mash East. He underwent military training at Mgagao Training Camp in Tanzania in 1974. After training, he was posted to Chimoio, Mozambique as Instructor.Cde Zimondi was later deployed to Gaza and Manica Province where he was appointed Field Operations Commander from 1977. He successfully commanded ZANLA combatants in many battles. He was appointed member of ZANLA High Command. His record in combat was described as “legendary”.

The late Lt Gen (Rtd) Dr SB Moyo, whose nom de guerre was Cde Delumuzi, was born in 1961 in Mberengwa. He abandoned his studies in 1977 and crossed to Botswana to join the liberation struggle. He received his initial Military training at CGT base in Zambia before going to USSR.

After training in USSR he returned to Zambia and became an instructor at various ZIPRA training camps. During ceasefire period, he went to Romeo Assembly Point in Makonde where he was attested into the Zimbabwe National Army. He held several appointments in the army till 2017.

Dr SB Moyo was appointed Minister of Foreign Affairs and International Trade in 2017. In this position, he never rested in his pursuit to improving Zimbabwe’s international relations. He will be remembered as a diplomat par excellence and a committed, gallant patriot.