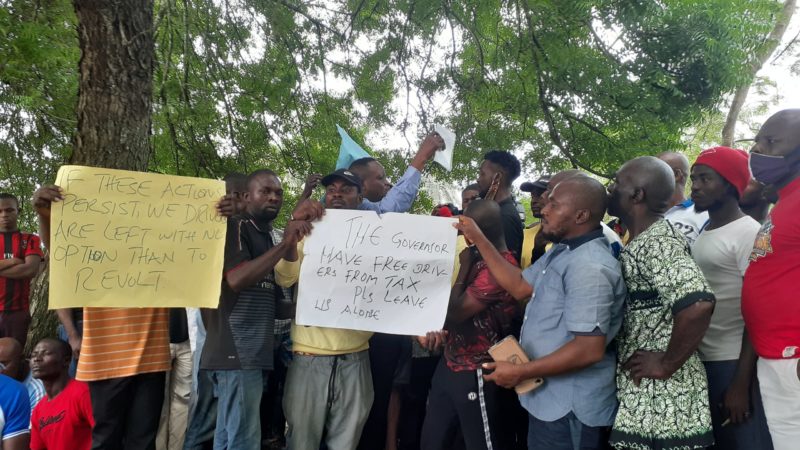 The Cross River State government has reassured the taxi drivers in the state that they are exempted from all forms of taxation and levies in the state.

The Secretary of the state’s Anti-Tax Agency, Rev. Fr. Julius Ada, said this in Calabar, the state capital, on Monday, while addressing protesting taxi drivers.

WuzupNigeria reports that the drivers had stormed the streets of the metropolis to protest against rising taxes, levies and ticketing imposed on cab operators in the state.

A unit manager of Taxi Drivers Union at the stadium in Calabar, Emmanuel Chukwu, explained that the drivers took to the streets over a new team that has been extorting money from them.

He alleged that one of the drivers in his unit paid about N70,000 as fine to the new team.

“As the state chairman I have gone to the Commissioner for Transport and they say they don’t know them as well as the Commissioner for Environment. We have Department Of Public Transportation (DOPT). We are contented with that; we have police and are contented with them but where are these civilians from? They have been trying t extort money from us and this has given us sleepless nights and we want to beg government that drivers are also in the chains of production. Without the driver there will be no road. We want the government to hear our voice.

“They can carry your motor and ask you to pay N10,000, or whatever they want. Our annoyance is that those people are not trained unlike DOPT and whatever they get from drivers enters their pockets. We are suffering every day and most of us are driving hire purchase vehicles and so we are not happy. We want these people to stop, we need DOPT as well as the police to work with us.”

But, while addressing the protesters, Dr. Julius Ada, said the state governor, Dr Ben Ayade, had exempted taxi drivers from all levies.

Ada noted that the state government would sensitize all Local Government chairmen on the development in a soon to be held town hall meeting.

“You are not supposed to pay tax, the governor has exempted you and very soon n we will have a town hall meeting where all the local government chairmen will be called to have a briefing and we will all let them know that you are a free group of people from taxation so we encourage you to do your best.

“We are representing all the local governments today and we are going to come out with what we call a brigade. The brigade will be on their uniform, and when you see them in their uniform you can call them on their hotline and we will get back to wherever you are and then we will take appropriate action against all those who are involved in tax illegality.

“The governor is so sad about the number of illegal checkpoints, illegal ticketing, the governor outright if you give me that ticket, the governor outright said no to ticketing. He established the anti-tax agency and says stop illegal tax collection, stop ticketing, and all illegal haulages, stop molestation of the poor. Taxi drivers you are free people. I want to thank you for this peaceful demonstration, do not be people that will bring trouble to the state.

“The governor decided to take men and women of God to see how they can ameliorate the plight of the downtrodden. We are not politicians, we are out to protect you, we are doing the right thing and can assure you that you are being protected,” he said.