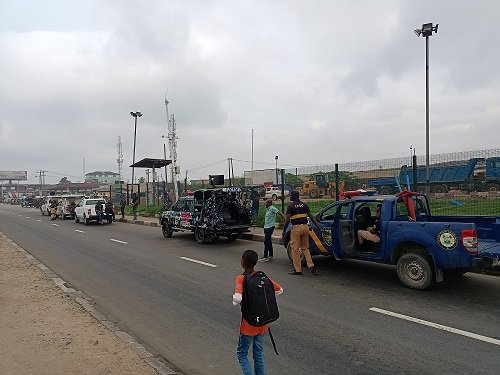 Commuters on the Berger axis of the Lagos-Ibadan Expressway, inward Lagos State has lamented the mounting traffic jam as a result of the stop-and-search exercise being carried out by security operatives on passenger vehicles in search of Yoruba Nation agitators.

The security operatives had barricaded the expressway, limiting the number of vehicles that could gain access to Lagos.

The number of vehicular lanes that could access Lagos from Ogun State has been reduced to two instead of the conventional four.

At Ketu, near the Gani Fawehinmi Park, policemen were seen searching vehicles.

They also blocked the routes leading to the venue of the protest and positioned vehicles at strategic locations.

During the search at Ketu, one of the policemen asked if posters or banners were in the vehicle.

Some passengers were also checked and asked if they had any weapon on them before diverting the vehicle to another route.

At both locations, some passengers were asked where they are coming from and going to.