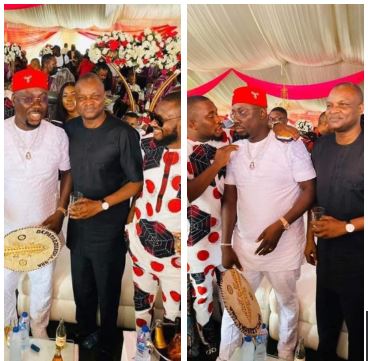 Less than 24 hours after he was trolled on social media over his presence at the burial of the mother of Obinna Iyiegbu, better known as Obi Cubana, Deputy Commissioner of Police, Abba Kyari, has replied his critics.

The burial, which was held at Oba in Idemili North Local Government of Anambra State, was the talk of the town as virtually all blogs and conventional media reported it.

As expected, hundreds of pictures and videos of the event have been trending on social media.

Many people, however, expressed reservations after the pictures of Kyari posing with the celebrants and other guests at the event went viral.

Critics queried his presence at such occasions which seemingly had the creme de la creme and affluents in society including people from all shades and walks of life whose source of wealth is unknown.

MORE READING!  Why I auditioned for BBNaija despite being famous - Boma

Also in attendance were businessmen, politicians, musicians and actors.

The super cop disclosed that he attended the funeral because of his relationship with Iyiegbu, whom he described as hardworking.

“Obinna Iyiegbu popularly known as Obi Cubana is one of the most hardworking entrepreneur and Humble personality that I have known for many years. He is a brother and Good Friend.”

“For his good nature and Good heart, Today I had to Squeeze out time from my busy schedule to Honor him, by Attending the burial of his Beloved Mom In Oba town Anambra State.

“May GOD Almighty Give the Family the Fortitude to bear the Great loss. Amen,” he prayed.