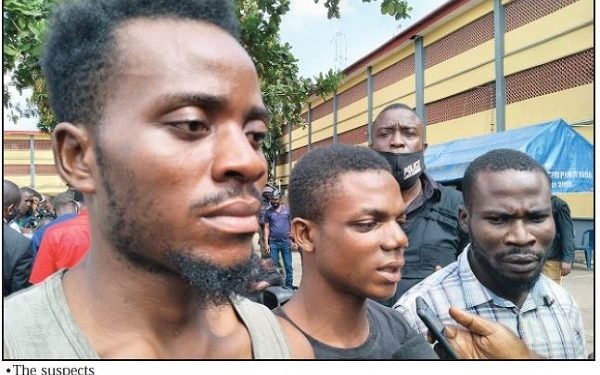 A teenage blacksmith identified as Shapraku Umade was arrested by police for alleged gun running.

Shapraku Umade after his arrest said he learnt to fabricate guns in his community where they are forced to defend themselves against killer herdsmen.

Umade, a native of Adikpo in Benue State, said he learnt to make pistols, AK47s, submachine guns, revolvers and pump-action guns from a book he bought, adding that he started the trade under his late father when he was 15-year-old.

Umade was arrested on August 3, alongside Moses Anzuur, 19, and James Tsebee, 20, at Jakande Estate, Lekki, after they were allegedly found with locally-made pistols.

They were alleged to have brought the pistols to Lagos for sale to armed robbers and cultists at N30,000 each.

But Umade, who was paraded yesterday, said he came to Lagos in search of one Miyaki who bought both pistols from him in Adikpo but did not pay for them.

“I did not bring the guns to Lagos. I came to Lagos two weeks ago with my brother, Moses (Anzuur) to look for Miyaki. Miyaki sometime ago, came to our community and collected two guns for N30,000 each but he did not pay.

“I usually buy metals from scrap collectors and then, cut them to suit the gun I want to produce.”

Commissioner of Police Hakeem Odumosu said they have been involved in gun running for over two years, adding that investigation was ongoing.

MORE READING!  Pastor jailed for life for raping girls, 14 and 16, during deliverance
Related Topics:Benue StateGun running businessherdsmenPolice
Up Next