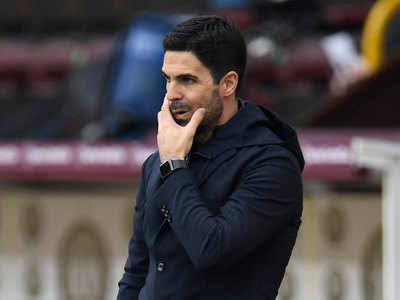 Diogo Jota’s brace and Mohamed Salah’s nutmeg sunk the Gunners at the Emirates to go two points closer to fourth-placed Chelsea, leaving Arsenal in a tussle for European qualifying.

Speaking after the match Arteta told Sky Sports that they deserved to lose the match, admitting that Liverpool deserved the win.

“We completely deserved to lose the game. They were better in every department and deserved to win the game with the margin they had, or even more. I accept responsibility for the way we played today.

“Liverpool completely deserved to win the game, probably by a bigger margin. We were extremely poor. We apologise.

“I don’t have to use any excuses – that we don’t have five or six players – the standards are much higher at this football club and I have to get them to perform at that level. It was technical as well.

“We gave every ball away and could not put three passes together. The basics weren’t there today. If you do that against this kind of opponent, you get punished like we have.

“At the moment I am in shock. I didn’t expect that because of the way the team trained. It is a challenge. A challenge brings an opportunity. If you have courage and you represent a club like this, you have to stand up and take it.”

Related Topics:ArsenalLiverpoolMikel Arteta
Up Next