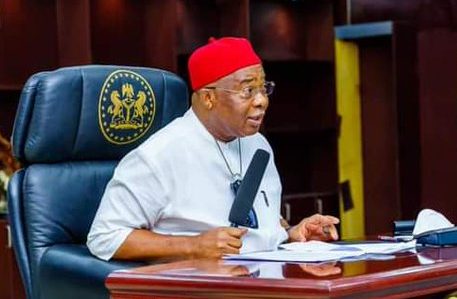 Governor of Imo State, Hope Uzodinma has donated N105 million to 21  families of police officers allegedly killed in Imo during the recent attacks by gunmen.
Uzodinma presented a cheque of N5 million each to families of the deceased officers at the police headquarters shortly after he received the Inspector General of Police (IGP), IGP Alkali Usman, on Friday, at the Government House.
He said that the officers paid a supreme price, adding that government must not fail to cater for those they left behind, NAN reports.
“I can assure you that peace has been returned to Imo as at today, it was not an easy journey but we have conquered insecurity in the state.
“It is most regrettable that police and other security agencies lost its personnel in the struggle to return peace in the state, but I urge families of the victims to take solace,”  he said.
The governor commended security agencies in the state for their gallantry in fighting crime, especially the recent attacks on security formation in the state.
He also promised to make the state safe for residents of Imo, adding that the state would be too hot for criminals to operate.
Earlier in his remarks, Usman commended the governor for showing great concerns over the death of some officers.
The IGP who also commissioned some security vehicles donated by the governor urged officers to occupy the space in Imo.
He commended the police for living up to expectations in Imo and urged them not to relent in fishing out criminal elements in the state.
The IG also condoled with the families of the deceased officers and assured them that the police authority would not abandon them.
MORE READING!  Return to work within 24hrs or forfeit your salaries, Wike warns striking doctors
Related Topics:Governor Hope UzodinmaImo state
Up Next