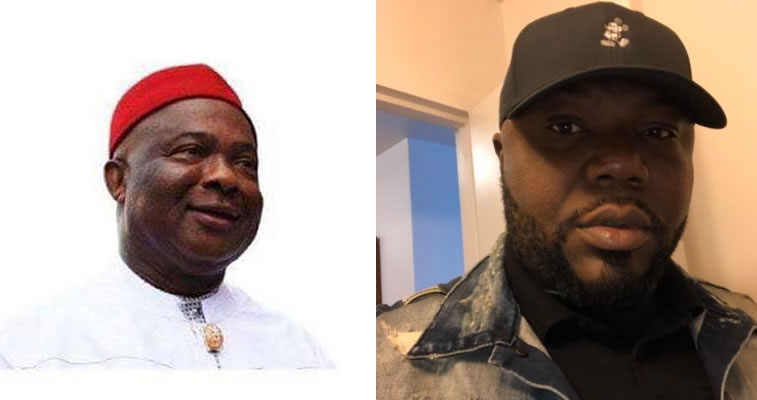 The Coalition of South East Youth Leaders has called on security agencies to immediately pick up a journalist, Jackson Ude, for allegedly accusing the governor of Imo state, Hope Uzodinma of forging his certificate.

The group in a statement on Sunday by Goodluck Egwu Ibem and Kanice Igwe, who are the President-General and Secretary-General respectively, said that the journalist should be arrested for defamation of character.

The group said the journalist was being sponsored by opposition members, who, they claimed, were aggrieved and still in shock on the “credible” emergence of Uzodinma as the governor of the state.

“We condemn in strongest terms the false allegation by one Jackson Ude, a journalist who accused the Executive Governor of Imo State , Senator Hope Uzodinma of Forging his University academic certificate.

“This allegation is baseless, unfounded, ill-tempered and a total falsehood born-out of jealousy to tarnish the hard-earned reputation of a man that has worked so hard to always be on the path of truth and uprightness in his dealings. He is a man of impeccable character and proven integrity.

“Senator Hope is a man of ‘Hope’. It is only a man without hope that engages in questionable behaviors and character because he doesn’t know what tomorrow holds for him. Governor Hope has always been on the path of honour and will never be involved in such an unspeakable act of condescending so low to forge any document, not to talk of a University degree.”

“It is very clear that Jackson Ude is a frustrated man without any means of livelihood cheaply hired by some disgruntled elements to cast aspersions to tarnish the good image of the Governor.

“We are very much away that this senseless accusation came-up because of the Governor’s resolve to probe the financial records and dealings of past administrations. This distraction is just a cheap way of changing the narrative, but their plans are dead-on-arrival.

We would have ignored him hoping that he is bereft of fact, but because of the glaring prejudice for the government and the good people of Imo state informed our action and for posterity sake, we deem it necessary to respond to the callous and baseless assertion to save the general public from being misformed by the antics of detractors and misfits determined to mislead the people.

“Such write-up is not just geared towards casting aspersions on the Governor’s matchless integrity, but a conscious calculated attempt to pit his Excellency against the good people of Imo whose collective will as enshrined in the Constitution, the Governor swore to protect.

“Jackson Ude should be told in plain language that despite the fact that politics is a leveller in the country, water still finds its course, Senator Hope has grown past the type of crude and local politics Jackson wants to engage him in.

“We call on the security agencies especially the police to as a matter of urgency arrest Jackson Ude for false accusation, defamation of character, dissemination of false information to the public and prosecute him in accordance with the laws of the land, to serve as a deterrent.

“We therefore urge the Executive Governor of Imo State, Senator Hope Uzodinma to disregard the antics of his detractors and concentrate with the mandate freely given to him by Imo people to deliver democracy dividends and make Imo great.” It stated.

I will bequeath free, fair elections-Buhari