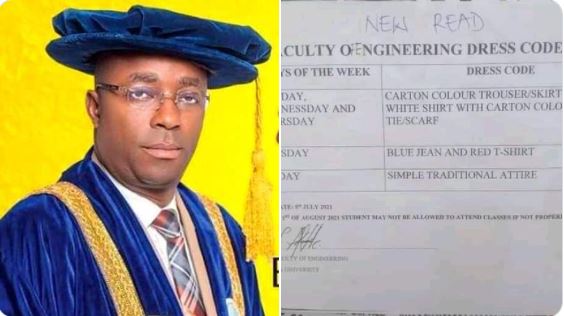 Nigerians on social media have reacted to the new policy of Niger Delta University, Wilberforce Island, Bayelsa State that mandated students to wear uniforms on campus.

WuzupNigeria earlier reported that the Bayelsa State-owned institution has directed that every student must procure and wear the new uniform on campus as a means of identification to ‘curb cultism and other crimes.’

The directive was issued on Monday by the vice-chancellor of Niger Delta University, Prof. Samuel G. Edoumiekumo, in a memo.

According to Edoumiekumo, the decision on uniform was taken by the varsity’s senate after James Okunmakpeye, a student of the institution, was shot dead in April 2021.

The VC noted that the uniform policy had undergone deliberation since 2017 when the heads of departments (HODs) and faculty deans suggested a means of identification for students.

This is just as he reassured students that the respective Heads of Departments will determine their preferred colour.

Reacting to the development on Twitter, Aaron Erefitei Favour, a concerned student wanted to know the justification for imposing such uniform.

“Why must university students put on uniforms in the first place?”

It’s not only engineering students. Other faculties have been wearing their own uniforms quietly.

Even me wey dey here get my own uniform and again it’s not compulsory to buy from the school.

He got a reply from a certain Emi Tama, also on the same thread, who noted that, but for the mandatory clause in the directive, he saw nothing wrong in the school decision.

“I don’t see anything wrong in it, the only thing that doesn’t go down well with me is the fact that they are making it compulsory for students to buy from the school if it’s true.”

Another tweep, @tALLeazy_ who is apparently a student of the institution expressed concerns about the degrading level of Niger Delta Univeristy.
“Omo this is what my school has been reduced to, I trust the engine boss Sha e no go work,” she bemoaned.

An entrepreneur, Eric Aliya, agreed with her view by knocking the school management. “True true, na glorified secondary school.”
In what appeared like a twist to the narration, a certain Umar Khalifa seized the opportunity to slam social critics for not being vocal on the matter, saying they were being silent because it was not a northern school that was involved.

Hear him, “Its not kano or kaduna so y’ll hypocrites are quite.”

A handful of tweeps, however, rose to the defence of the school.

They stressed that such development is not new and and further applauded the institution for taking the initiative for easy identification.

One of such fella is @Dicky_AMG, who stated that “Even military men and policemen wear uniforms. So why should university students not wear uniforms?

“In fact, the university should give them nika (shorts) to wear. Them never reach to wear trousers.”

A female student of the school, Tari Simon, with Twitter handle @SimonTariladei struggled to understand what the fuss is all about.

According to her, some departments have started using it already.

“It’s not only engineering students. Other faculties have been wearing their own uniforms quietly. Even me wey dey here get my own uniform and again it’s not compulsory to buy from the school,” she stated.