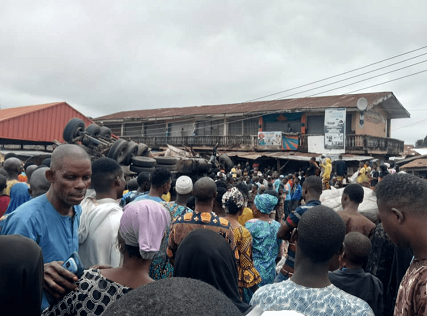 The Oyo State Police Command has confirmed that five persons died in the accident that occurred on Sunday morning when a tanker conveying gas rammed into the popular Bode market in Ibadan, Oyo State capital.

An eyewitness who craved anonymity had disclosed that the tanker, which was coming from Idi Arere axis lost control and crushed many traders, a tricycle and a commercial motorcycle.

Some of the traders, who were at the scene also explained that the accident occurred around 8.30am, adding that the loud impact of the gas tanker when it rammed into a shopping complex inside the market caused apprehension.

Omotayo told WuzupNigeria correspondent that it was a case of a fatal auto mishap, involving a gas carrying tanker and a tricycle.

“So far, 5 persons have been recorded dead and deposited at the morgue. The number of injured persons is yet to be confirmed. The police in a concerted effort with the Fire Service have successfully managed the situation to ensure there’s no fire outbreak. An effort to evacuate the accidented vehicles is currently ongoing.

“Investigation to ascertain the identities of the deceased is at top gear. However, the situation is under control and further development will be communicated soonest,” he said.