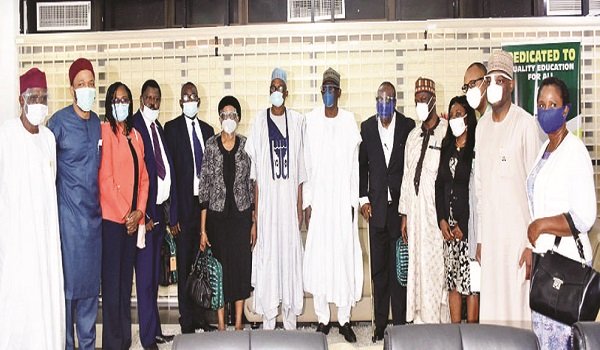 The Special Presidential Visitation Panel set up to probe the removal of the University of Lagos (UNILAG) Vice-Chancellor, Prof Oluwatoyin Ogundipe, will submit its report in two weeks.

Ogundipe was removed by the Wale Babalakin-led Governing Council over allegations of financial infractions.

Last Saturday, President Muhammadu Buhari announced the setting up of the special panel, saying he had no personal interest other than that of the university.

Minister of Education, Adamu Adamu, speaking during the inauguration of the seven-member panel, chaired by Prof Tukur Sa’ad, said it had two weeks to complete its assignment and submit a report to the Federal Government.

Adamu advised the panel chairman to focus its probe only on the crisis rocking the university.

He said the Federal Ministry of Education, over the past one year, had been inundated with complaints and correspondences from the management and the UNILAG Governing Council as well as the National Assembly on lingering governance issues in the institution, including allegations of financial infractions and breach of responsibilities.

“I will like to assure the chairman of the panel that in this case there will be no influence on you or UNILAG by the Visitor and I also assure you that the visitation panel is only on the issue of the crisis in UNILAG.

“Over the past one year, the ministry has been inundated with complaints and correspondences from the management and the Governing Council of the University of Lagos as well as the National Assembly, on lingering governance issues in the institution, including allegations of financial infractions and breach of responsibilities.

“The face-off has lingered on unabated, in spite of several interventions by the leadership of the Federal Ministry of Education, many stakeholders and the National Universities Commission [NUC), eventually leading to the removal of Prof Oluwatoyin Temitayo Ogundipe as vice-chancellor by the University Governing Council during its meeting of Wednesday, 12th August 2020. The council thereafter appointed an acting vice-chancellor to fill the void.”

The minister said Ogundipe’s removal further opened up a plethora of accusations and counter-accusations. He appealed to stakeholders in the university to cooperate with the panel and to allow it to work unhindered.

“It is instructive to note that the decision of Council, instead of stabilising the University of Lagos, only managed to open up a plethora of accusations and counter-accusations.

“This led to the widespread protests, outright rejection and lack of acceptability of the acting vice-chancellor by the university community,” the minister stated.

Chairman of the panel, Prof Sahad, thanked the minister for finding the members of the committee worthy of carrying out the national assignment.

He said the panel would put in its best to ensure the resolution of the crisis, while calling on the Governing Council as well as the Senate to give them full cooperation in the course of discharging their duties.