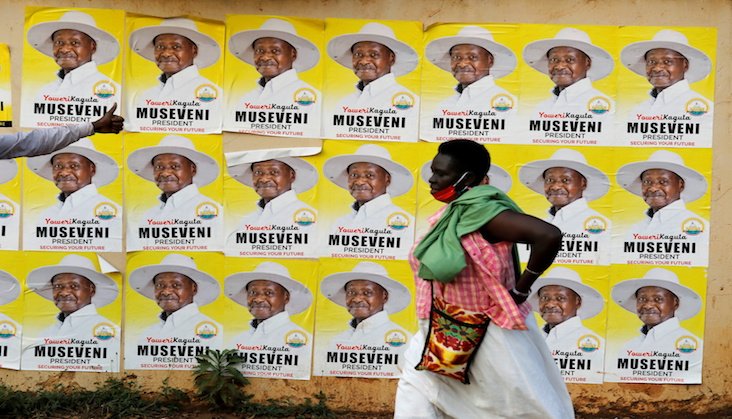 No one is surprised that Uganda’s long-term President Yoweri Museveni has won a sixth term in office. But the real change has been a changing of the guard in the opposition, with long-term opponent Kizza Besigye supplanted as the key political foe to Museveni by Bobi Wine. Both in parliament and as a target for Museveni’s security services.

On Saturday, Uganda’s Electoral Commission announced that long-term president Yoweri Museveni has been re-elected. The polls body said the incumbent, who has been in power since 1986, got a new mandate after he won 58.64 per cent of the vote. His closest challenger, Robert Kyagulanyi (Bobi Wine), won 34.83% of the vote.

Museveni wore military fatigues to address the nation on Saturday night: perhaps a sign he was rattled by getting the lowest score in an election since the mid-1990s. The president’s speech flirted with populism – talking about the elites accruing wealth and the expense of the masses, though without mention of the connections those elites might have with the ruling party.

And Museveni connected with a key constituency for him – rural farmers – claiming he would fight against evictions from land in his next term and praising his administration’s efforts in bringing agricultural technology to the masses.

On Friday, Kyagulanyi said that the results were doctored, claiming that among other things, armed security officers had given people pre-ticked ballot papers. He also said his home had been surrounded and visitors blocked from seeing him, and that he and his wife’s phones had been blocked. Opposition party Forum for Democratic Change (FDC) also called the election “fraudulent.”

MORE READING!  All you need to know as Buhari declares Zamfara no fly zone

“We believe we have a comfortable win over Museveni in this election,” Wine said at the press briefing.

While Besigye declined to run for what would have been a fifth stab at unseating Museveni, he was vocal about the fact that Museveni would win anyway. But as much as the January 2021 elections were about unseating Museveni, they were also, in a way, about Besigye’s own succession as Uganda’s most visible opposition leader, and the main target of Museveni’s security machinery especially during elections since 2000.

Crown of Thorns
The main part of that succession are the dangers of opposing Museveni at the ballot. The two main opposition candidates NUP’s Kyagulanyi and FDC’s Patrick Oboi Amuriat (POA), suffered the wrath of Museveni’s security forces during nominations and the subsequent two-month long campaigns. This time, the police and military crackdowns were driven by the justification that the opposition leaders were flaunting COVID-19 rules on the campaign trail.

At least 58 people died in December after Wine was arrested, by far the bloodiest of campaign days in the lead up to the Jan 14 elections. A still undetermined number have died in the days since, including one of Bobi Wine’s bodyguard’s who was run down by a car in December. Wine himself faced Election Day without both his main campaign team, who were arrested in late December, released on bail, and then re-arrested and the team he subsequently appointed to take over, who were arrested in January.

Amuriat, on the other hand, has spent the campaign period barefoot, after he lost his shoes during an arrest in November. His campaign meetings have also been broken up, and he and his driver have been frequently arrested and charged with traffic violations in different parts of Uganda. Both of them were teargassed numerous times, shot at, and were generally harassed by police officers and military men.

For Uganda watchers, the main question of these elections was whether Bobi Wine had enough of a political following to make an impact at the polls. The FDC, which has only ever fielded Kizza Besigye as its presidential candidate, was left politically leaderless after Besigye declined to run again for the recent elections.

While Wine, who joined elective politics just three years ago, ran on a different party, the FDC’s performance at the polls, both presidential and parliamentary, was also an important part of the Jan 14 elections. The FDC instead settled on Amuriat, who is said to have been unready for the role and generally unprepared.

The EC’s results placed Amuriat far from Museveni and Wine, as the only other candidate who won anything beyond 1% of the vote. But Wine came out clearly as Besigye’s successor, and the two could not be any different.

“Wine is everything that Museveni, and by extension Besigye, is not,” a Ugandan journalist told The Africa Report a few days to the elections. The assessment, he explained, went far beyond age. Wine, unlike both Besigye and Museveni, does not come from a military background and has no stake in NRM’s history as the party-and army-that stabilised Uganda in the 1980s. He is also an urbanite from the Buganda community, unlike both Museveni and Besigye.

New power in parliament
The assessment points to a change in Uganda politics which in part owes its roots to Besigye’s two-decade-long opposition, but mostly to the expected end of Museveni’s now four-decade-long reign. Among the factors at play in these elections, right off the bat from the 2016 elections, was whether Museveni would run again. The parliamentary sessions in 2018 to discuss the age limit, Museveni’s only barrier to being on the ballot on January 14th, ended up in fistfights, claims of widespread bribery, and a prominent court case.

Although Museveni’s party won a majority in the nearly 500 parliamentary seats, several of his close allies, including his vice president, lost their seats at the polls. Kygulanyi’s party, NUP, also won an opposition majority, which means that it will now replace Besigye’s FDC as the leading opposition party in Uganda.

While Kyagulanyi himself will not be in the next parliament-Uganda’s laws do not allow for a person to run for the presidency and a parliamentary seat at the same time he is now essentially the voice of several generations opposed to both Museveni’s, and the ruling party NRM’s long stay in power.