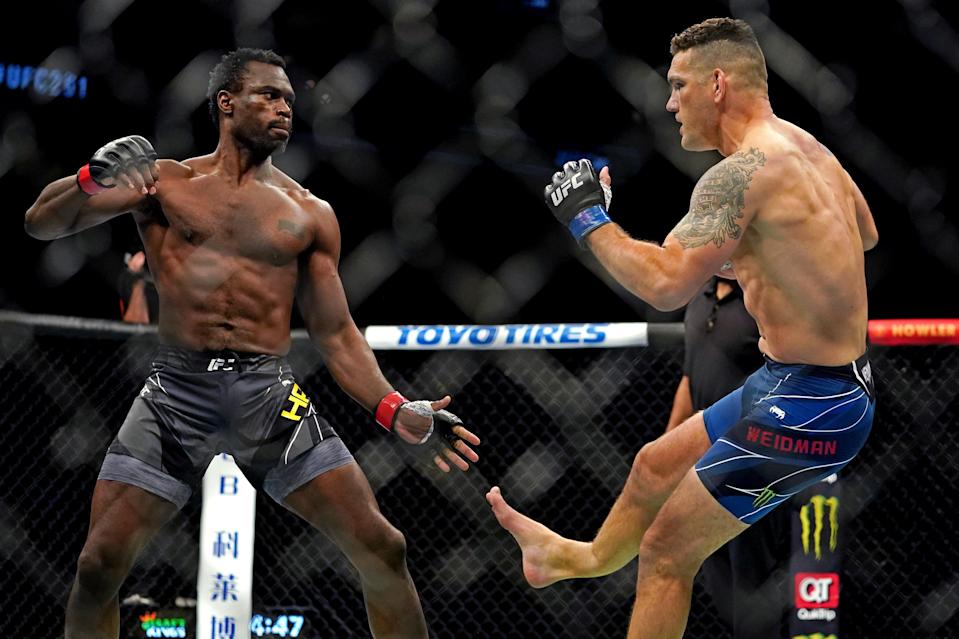 15,000 fans were left stunned as Hall claimed the middleweight bout in Jacksonville, Florida, after just 17 seconds as Weidman’s tibia broke through his skin.

The 185-pound rematch was instantly called off and ruled a TKO for Hall (17-9) inside VyStar Veterans Memorial Arena.

CBS reported that Weidman (15-6) ironically scored a similar victory over Anderson Silva in their 2013 middleweight title rematch that left the former champion sidelined for a full year.

The 36-year-old however bowed out in style after his leg was placed into a compression sleeve as he could be seen giving the crowd a thumbs up while being stretched out with a painful look on his face.

Reacting after the fight, an emotional Hall said: “I got nothing but respect for Chris Weidman. He is truly one of the best. It is a crazy story that he was the first man I fought that defeated me and introduced me to fear. I didn’t know what fear was and during that time we went different paths. He was the first one to defeat Anderson [Silva], I was the last. It’s just crazy how we ended up here again.”

“I wanted to put on a great performance but I just wish him and his family well,” Hall said. “It’s the sucky part of this sport, it’s the hurt business but I have nothing bad to say about him. I hope he can come back from it. You are still the best, Chris.”

Super League would have destroyed the EPL, 100 per cent – Wenger