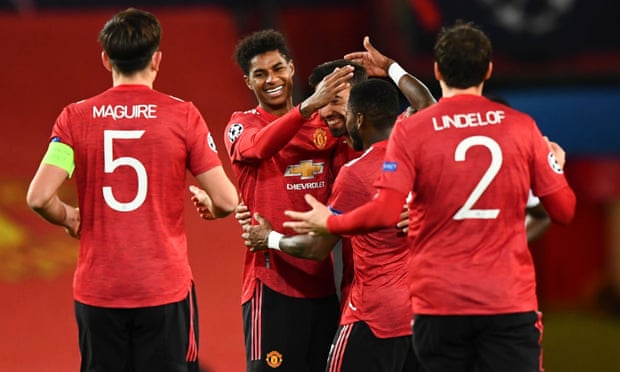 Manchester United continue their good run in the Champions League after thumping RB Leipzig 5-0 at Old Trafford on Wednesday night.

Marcus Rashford nagged his first-ever career hattrick in the night after only coming on in the second half for Mason Greenwood who scored United’s first.

The 18-year-old got back his mojo after an unsettling period following his dismissal from the English national team on his first call-up after flouting COVID-19 instructions.

Greenwood gave the home team the lead in the 21st minute to break the deadlock after Paul Pogba’s mazy run forward to set Greenwood up for the opener.

Super sub, Rashford turned the game around for the host when he came in as a sub for Greenwood in the 63rd minute, scoring his first club hat-trick in the space of about 15 munites.

Rashford picked up a gorgeous pass from fellow sub, Bruno Fernandes, to get a solo run from his own half, beating the be offside trap and VAR to score his first goal.

The Englishman made it three for the home side in the 74th minute after picking up Upamecano’s to get a stylish finish.

Rashford’s strike partner, Anthony Martial got his first goal of the season in the 87th minute through a penalty kick he won and smashed into the bottom left corner.

Martial was on hand to set MBE awardee, Rashford up for his first hat-trick for the Reds in the 90+2′ minute. The hat-trick hero gave Leipzieg’s goalie, Gulacsi no chance to deny him the Champions League ball.

He also became the first Red Devils player to score a hat-trick off the bench since Ole Gunnar Solskjaer in February 1999.