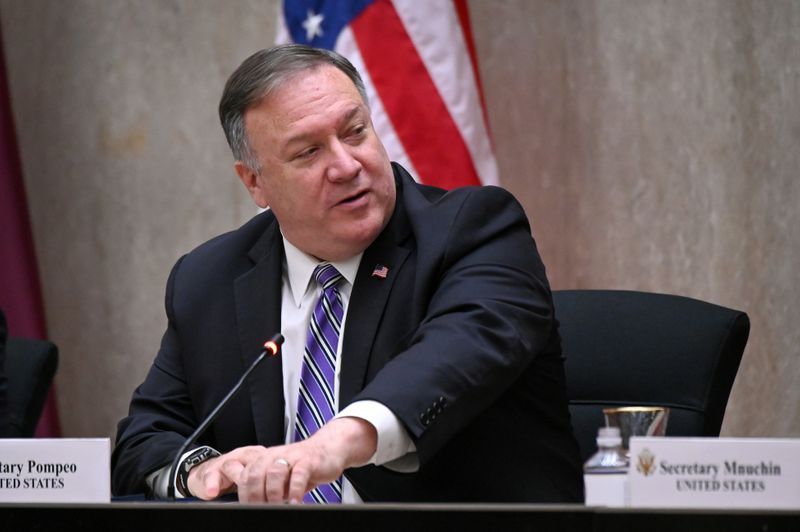 “Today, the United States welcomes the return of virtually all previously terminated UN sanctions on the Islamic Republic of Iran, the world’s leading state sponsor of terror and anti-Semitism,” Pompeo said.

“This step is not supported by the UN Security Council because the U.S. is no longer in the nuclear agreement and accordingly no longer plays a role in UN resolution 2231,” Zarif said referring to the resolution in which the UNSC backed the Iran nuclear deal signed in Vienna in 2015.

The move by Washington was merely a “propaganda trick” ahead of the U.S. election, Zarif said on Iranian state television.

Washington’s plans to reimpose international sanctions on Iran have been met with overwhelming opposition from other countries.

Other members of the UN Security Council (UNSC), including key U.S. allies who are part of the 2015 Iran nuclear deal, have rejected Washington’s move and have vowed to ignore it.

Under the nuclear deal, formally known as the Joint Comprehensive Plan of Action (JCPOA), Tehran limited its nuclear activities in return for sanctions relief.

“Sanctions are being re-imposed on Iran pursuant to the snapback process under UN Security Council resolution (UNSCR) 2231. On August 20, the United States notified the President of the Security Council of Iran’s significant non-performance of its JCPOA commitments,” Pompeo said in the Saturday statement.

“Virtually all @UN sanctions have returned on Iran, the leading state sponsor of terrorism and anti-Semitism.

“This includes a permanent extension of the arms embargo. This is great news for peace in the region!” Pompeo added on Twitter.

He later added that Washington would soon “announce a range of additional measures to strengthen enforcement of @UN sanctions on Iran.”

“Our maximum pressure campaign on the Iranian regime will continue until it stops spreading chaos, violence, and bloodshed,” he said.

The U.S. launched a formal bid in August to revive the UN sanctions under the “snapback” mechanism included in the Iran deal.

Those sanctions include the indefinite extension of an arms embargo that would otherwise expire in October.

Washington said it would provide more information this weekend and next week on how the U.S. intended to enforce the global sanctions.

“In the coming days, the United States will announce a range of additional measures to strengthen implementation of UN sanctions and hold violators accountable,” Pompeo said in Saturday’s statement.

“Our maximum pressure campaign on the Iranian regime will continue until Iran reaches a comprehensive agreement with us to rein in its proliferation threats and stops spreading chaos, violence, and bloodshed,” Pompeo asserted.

Trump is likely to address Iran in his speech next week to the UN General Assembly’s largest online meeting of world leaders.

The stand-off between the U.S. and other member states over the issue threatens a diplomatic crisis at the world body.