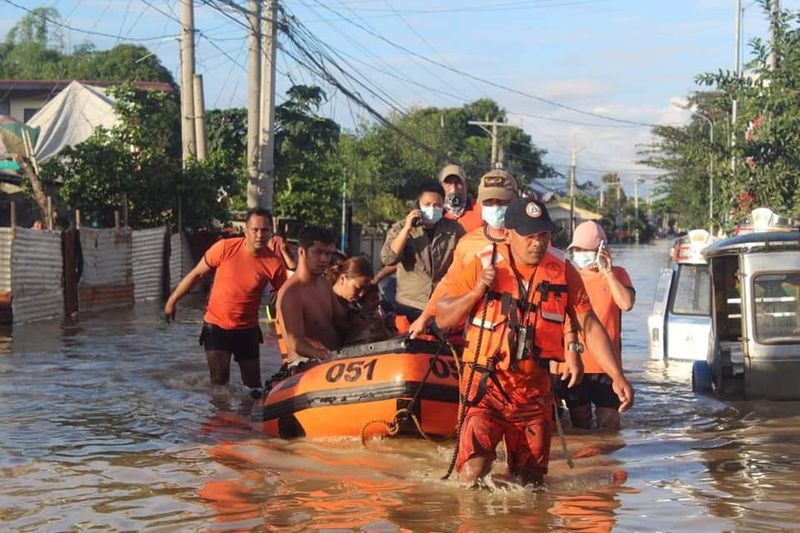 At least 53 people have died following floods, landslides and other accidents caused by Typhoon Vamco in the Philippines, police and disaster officials said on Saturday.

Twenty-two people were also reported missing, mostly in landslides in the affected provinces on the main island of Luzon, police said.

Floodwaters rose to unprecedented levels in the northern provinces of Cagayan and Isabela, after torrential rains from Vamco forced a major dam to open its spillway gate overnight.

Rainfall from nearby provinces ran into the Cagayan River, which overflowed and exacerbated the flooding, said Cagayan provincial Gov. Manuel Mamba.

“This is unprecedented. It’s our first time experiencing this kind of flooding,” Mamba told Manila radio station DZMM Teleradyo, as he asked for help rescuing people trapped on rooftops.

“Our rescuers are already overwhelmed,” he said. “Our province has turned into an ocean of muddy floodwaters.”

MORE READING!  Go and check all banks in the UK, Gowon tells parliamentarian

President Rodrigo Duterte assured flood-stricken residents that help was on the way, with the military, coastguard, police and other government units dispatching more teams, helicopters and boats.

Duterte added that he has created two task forces to fast-track relief and rehabilitation in the disaster-hit areas.

“Just wait a little bit more time, it will just be minutes,” he said in a televised address. “I know that you need help and I know that you are expecting help to arrive soon in your area.”

“We will rise from this,” he added.

Vamco blew out of the Philippines on Friday after battering the country’s main island of Luzon, triggering the worst flooding in years in the capital Manila and surrounding provinces.

More than one million people were left with no electricity during Vamco’s onslaught, while more than 400,000 were forced to flee their homes, disaster officials said.

In Vietnam, authorities were preparing for Vamco to slam into the country’s coast on Sunday morning, with evacuation plans for 460,000 residents in six central provinces.

Local officials have also informed more than 266,000 fishermen working on 56,000 fishing boats to seek shelter and mobilized over 300,000 people for rescue activities, the Committee said.

Vamco was the 21st tropical cyclone to hit the Philippines this year, and the fifth since October. More than 50 people have died and more than three million people were affected by the four previous cyclones.

The strongest typhoon to hit the country was Typhoon Haiyan, which killed more than 6,300 people and displaced more than four million in November 2013.

For Vietnam, Vamco is the 13th storm to hit this year. Most recently, Storm Etau made landfall on Tuesday before weakening into a tropical depression, causing floods and heavy rains in central provinces.

Central Vietnamese provinces have been badly affected by storms, landslides and floods this year, which have left at least 235 killed or missing since the beginning of October. (dpa/NAN)

Related Topics:PhillipinesTyphoon Vamco
Up Next