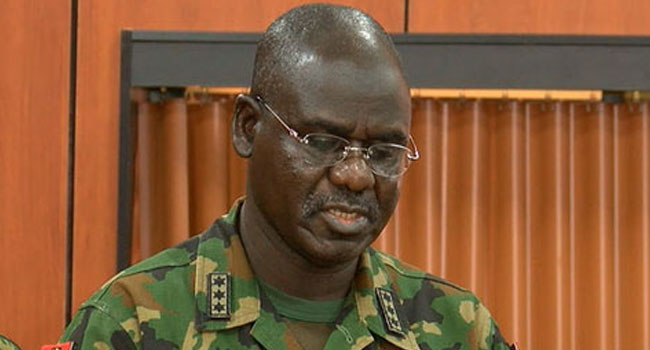 Something interesting struck my mind having closely monitored events around the immediate past Chief of Army Staff (COAS), Lt. Gen. TY Buratai (rtd). One is perplexed at the stream of human traffic to his residence or complimentary phone calls every day.

It’s seldom experienced with past public office holders in Nigeria. Unlike Gen. Buratai, most former prominent high profile public holders are deserted by their friends, loyalists and acquaintances in less than a week after office. Forlornness is imposed on them even from the least expected quarters.

Gen. Buratai officially quitted office in retirement from active service as confirmed by the Presidency on January 26th 2021. But whether in his house or anywhere else, Gen. Buratai was surrendered by tons of guests or visitors seeking his attention. And virtually all the guests sought his attention to just simply say, “thank you,” sir or General. “Have a blissful retirement; you have tried for Nigerians.”

It was like a carnival with very soothing compliments from known and unknown faces. Simultaneously, his phones also never stopped buzzing! Calls invaded his phone lines very engagingly. I placed myself in his shoes, and muttered inaudibly, truly, Gen. Buratai has amazing energy.

The retired, but not tired Army General answered all calls or deferred others, he could not pick immediately, if in a serious discussion with someone else; but certainly, call back at a later time. I know, the life of a soldier is not an easy one. You are susceptible to death any day in the course of service to the nation or even retire as a physically challenged person, who got the physical deformity in the battlefront.

Pleasantly, Gen. Buratai has none of such misfortunes while serving in the Nigerian Army for over 35 years of meritorious service. Yet, by my rating, he was a warmonger to the core and the frontlines were his favourite abode.
I look at him as the breed of soldiers, I prefer to call, “the Powellian breed,” after America’s Collin Powell. Gladly, Gen. Buratai retired hale and hearty; in good shape and form as athletes would always exalt themselves. All thanks to God Almighty for his life.

I recalled that sometime in July 2015, a few weeks after his exit from office, Dr Reuben Abati, a seasoned journalist and former presidential spokesman to ex-President Goodluck Jonathan wrote a short opinion article titled, “My phones no longer ring.” He crafted the short piece narrating his experience, while he served as the President in Aso Villa.

The piece says, Abati’s phones never stopped ringing every minute. All his social media platforms also suffered the same fate with tens of thousands of messages every day and from everywhere, official or unofficial. It was very tasking and distracting to a point, even his spouse complained.

But he could not afford to ignore anyone of it because something urgent concerning his office might come up, seeking his attention. Ironically though, he got used to the phone distractions. But the same blitzkrieg of phones calls and social media messages miraculously dissipated the first week of his departure from office.

The experience of Abati is very normal in Nigeria for anyone who occupies a prestigious office such as a Media Chief to a serving President. This is more predominant in Nigeria especially for those who confine their duties whilst in the office to sharing the national cake to their friends and kinsmen. That’s when patriotic and selfless service is the least on the cards.

But it does not surprise me that such officeholders are forgotten faster than whirlwind by the same people the very minute they quit office. It is because the fortune seekers only attached artificial relevance to their person, the offices they occupied and the perks extracted from it.

But Gen. Buratai’s post-retirement experience with guests and visitors is a metaphor of Dr Rueben Abati’s experience of phone calls desertion. The former Army Chief’s phones have never ceased ringing. Gen. Buratai’s phones are still ringing with visits from kinsmen, traditional rulers, colleagues, friends, associates and all Nigerians. I am sure, he switches them off, sometimes to have a short sleep.

I can decipher and clearly understands why Gen. Buratai is deluged with phone calls and visits even after his active service. Gen. Buratai offered selfless and patriotic service to all sections of Nigeria, without discrimination, while he served the nation. Every nook and cranny of the country felt a consolatory and comforting pinch of his leadership.

From Enugu, Nigerians are thanking Buratai for his selfless service and the water project which the Nigerian Army under his leadership made possible for people in Abakpa Nike and its environs to enjoy free of charge through the Army’s Corporate Social Responsibility (CSR). I understand it’s the first time in centuries in history that community, hygienic and portable water has flown to their doorsteps in homes.

The visitors and callers from Abakaliki, Ebonyi state are eternally grateful for the Nigerian Army Reference hospital located in the area. The services of this world-class tertiary medical facility are also unrestrictedly open to members of the public and quite affordable. Gen. Buratai’s stewardship ensured it.

And in tandem with the non-kinetic aspect of operations of the Nigerian Army, Nigerians in Oyo state have reached out to Gen. Buratai in appreciation for a hospital and the bailey bridge in communities of the state. Also, leaders of Kisi, Arepo LGA in the same state are celebrating Gen. Buratai for donating a student’s hostel facility at the School of Basic Midwifery, Kisi.

Those calling from Lagos are saying, without the intervention of soldiers, armed rogues, miscreants and hoodlums under the guise of #EndSARs protesters would have completely reduced Lagos state to debris. Lagos would have lost its famed status as the commercial nerve centre in Nigeria.

Beneficiaries’ of the built and equipped 30-bed hospital at Tigi community in Plateau state, Riyom LGA have also joined the list of endless callers to thank Gen. Buratai. The classy hospital is servicing both the community and travellers on the federal road.

The leaders of thought and stakeholders from Borno state also enriched the list of multiple callers and visitors. Borno is one of the biggest beneficiaries of Gen. Buratai’s leadership of the Nigerian Army. The Nigerian Army is a major factor in the re-opening, rehabilitation and construction of new roads in Sambisa forest and its environs alongside the provision of other social amenities.

Still, in Borno, the new Nigerian Army Reference Hospital in Maiduguri, which is also open to the public is what has excited the people infinitely. The sinking of boreholes in Mafa and Dikwa areas of the state and distribution of tractors to farmers in Gudumbali is the numerous ways Gen. Buratai endeared himself to the people while in service.

The dais of excellent Military/Civil relations have also attracted buzzing phone calls from Imo state. The callers known and unknown to Gen. Buratai are grateful that the Nigerian Army under his guidance, built and donated five blocks of classrooms to Amakohia-Ubi Community Primary school and Local Government Education Authority (LEA) Primary school in same Amakohia-Ubi, in Owerri West LGA of the state as well as the renovation of a Central Primary School at Akpochiro and the renovation of medical centres in Mbaito in Imo State.

Some communities jubilated because the Nigerian Army under Gen. Buratai’ provided social amenities denied them by their respective state governments. So, personalities from Garkida, in Adamawa State who are beneficiaries of non-military projects in boreholes, initiated and completed by Gen. Buratai have been calling to extend appreciation. It is the same for the people of Fika in Yobe state, where modern boreholes have been dug by the Army to alleviate the age-long water problem of the people.

The people of Birnin Gwari in Kaduna State are similarly excited at the constructed road, linking the community with others; while the construction of a maternity ward at Ika in Delta State and construction of water project in Gelengu in Gombe State has intensified the busyness of Gen. Buratai guests and phones while in retirement.

And people from Benue state have also registered presence. The renovation of primary schools in Markudi, the Benue State and the renovation of health centres in Opoji in Edo State is the means through which Gen. Buratai’s won the hearts of the people throughout Nigeria. It’s the reason his phones have not stopped ringing and no one knows when the buzzing would halt.

Why the phones are still ringing may also not be far from the transformation of the Nigerian Army into a world-class institution. What else can we say? With multiple new Army schools; the revival of old moribund Army schools, innovations such as Nigerian Army Women Corps, Army Human Rights Desk and so forth are ineffaceable legacies that have etched the memory of Gen. Buratai’s service to the nation on the psyche of Nigerians.

I have relatively gathered that already, two universities in the US and another in Russia are calling on the immediate COAS to make himself available as a teacher in their Defence/War colleges. I know Gen. Buratai as an intellectual, philosopher, poet, brainy military strategist and tactician. It’s a thing of pride to me. I am excited that something good is coming to Africa and particularly from Nigeria.

This is why the phones are still ringing and will keep ringing. For anyone who discharges his duties with the best of intentions or perceives public office as an opportunity to serve his country, the phones will continue to keep ringing even after service. I do not intend to berate Dr Rueben Abati, but I only used his case which is in the public domain as an example. I beg his pardon if my expositions offended his sensibilities.

And I believe, for the amiable and enigmatic Gen. TY Buratai (rtd), his busy phones have entered another phase. He is poised to assume the position of an ambassador to one of the world powers to help Nigeria blight out the dark international connections of the Boko Haram terrorists sects.

Agbese wrote this piece from Abuja.