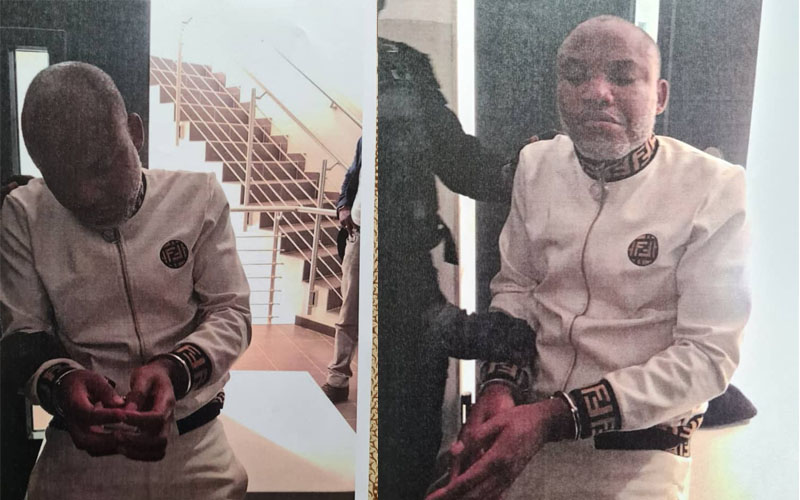 Series of new evidence have lent credence to claims that the Kenyan authorities might actually have a hand in the arrest and extradition of Biafra separatist leader, Nnamdi Kanu.

A popular newspaper in the United Kingdom, The Guardian, reported on Friday that available evidence shows that Kanu entered Kenya this year with his British passport on a visa expiring in June.

“His UK passport remains in Kenya,” it said.

The publication further quoted family sources as saying the fugitive was not in possession of a Nigerian passport at the time of his ‘abduction’ as he has verbally renounced Nigerian citizenship in broadcasts.

According to his brother, Kingsley Kanu, the IPOB leader had spoken to him while he was in Kenya, days before he went missing in June.

“I spoke to him on the phone, he was well, in Nairobi. His associates said he went out, he didn’t take his documents with him so he wasn’t planning on going anywhere. Then all of a sudden we see him paraded in handcuffs in Abuja,” Kingsley Kanu said.

“It is an extraordinary rendition, aided by Kenyan authorities,” he said. “It is an outrage that cannot be allowed to happen. We are holding the Nigerian government and Kenyan government responsible. The British government, they know what is happening,” he said, adding that UK officials had made contact with Kanu’s family and legal team and that there were concerns he would be abused in detention.

“I am concerned for his wellbeing because you know how they will treat him,” Kingsley said.

Kanu legal counsel has also accused the Nigerian government of “state kidnapping” and said he was abducted by Nigerian officials in Kenya and taken to Nigeria against his will.

The Guardian report further reaffirmed that abduction of a person from a foreign country with the aim of rendition to justice is illegal under international law.

Although the Federal Government has declined to disclose where he was captured, relatives and many of his associates have continually fingered the Kenya government of complicity in the unfolding drama.

Meanwhile, both the Nigerian and Kenyan authorities have denied that Kenya was involved in the arrest, while the UK consulate in Nigeria has said it contacted Nigeria’s government concerning the case. UK officials did not immediately respond to requests from the Guardian for information.

Kanu, the leader of the Indigenous People of Biafra (Ipob) – a prominent separatist movement proscribed in Nigeria – has long been a widely known and controversial figure in Nigeria. He has called for Biafra independence, including in broadcasts from Radio Biafra – a digital station he founded and ran from his home in south London.

Kanu was first charged in 2015, when Biafra secessionist mass protests erupted in Nigeria for the first time since the Biafra civil war. The conflict is one of the darkest chapters in Nigerian history and the bitter legacy still reverberates in Nigeria.

Kanu’s whereabouts had been unknown since he left Nigeria in 2017, after soldiers attacked his home in Abia state during one of a number of military operations against separatist agitators in the region.

To Kanu’s many followers he is the most vocal and defiant advocate for Biafran independence. Secessionist protests have been brutally shut down in Nigeria. Yet broadcasts calling for mass uprisings, taunting the president, Muhammadu Buhari, and targeting ethnic groups in Nigeria have drawn the ire of Nigerian authorities.

Nigeria’s attorney general, Abubakar Malami, said on 29 June that Kanu had been extradited to Abuja, after the cooperation between Nigerian intelligence services and Interpol.

“He has been brought back to Nigeria in order to continue facing trial after disappearing while on bail,” Malami said. He accused Kanu of “engaging in subversive activities” and of responsibility for rising armed attacks against police and civil authorities in southeast Nigeria that have been blamed on armed separatist groups.

The arrest of Kanu comes amid growing tensions around regional divisions within the country and armed separatism in the South East.