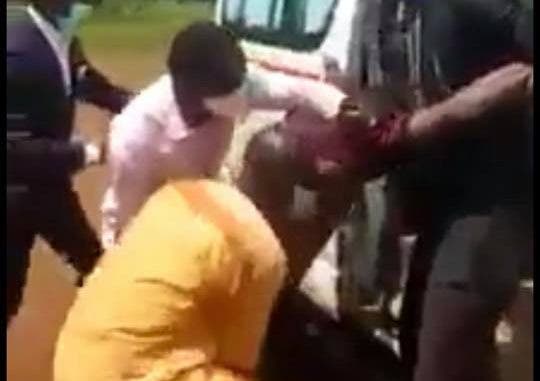 Two artistes, Ajibawo Lawal and Sunday Akhigbe, have been found dead inside a studio in Awolusi Bus stop in the Alagbado area of Lagos State.

They were found dead by residents around 7 a.m after  an all night performance inside the studio.

The residents told a police source that a generator and some hard drugs were found inside the studio.

This has led to speculations that they might have died as a result of the hard drugs or fumes from the generator.

Mafhuz Majeed who resides in the area said that other artistes were found unconscious inside the studio.

He said, “Nobody came out from the studio while a generator was left working. So, neighbours became suspicious and broke into the building through the window. Apart from the dead artistes, they met two others in a terrible condition. We had to rush them to a private hospital. The police have taken over the case and we don’t know the state of the men in Two artistes found dead inside Lagos studio, others hospitalised.”

According to a police report, the studio manager identified as Murtala Azeez who was hospitalized has been interrogated.

The report said, “We received a distress call from an anonymous caller that a crowd was seen converging on a studio at Alagbado where rumour had it that some persons died inside.

“Upon receipt of the information, police operatives went to the scene, which is Coded Music Recording Studio at Awolusi bus stop. Two artistes, Ajibawo Lawal, 37, and Sunday Akhigbe, 12, were met inside the studio dead.

“One Mr Bamidele Olajide, neighbour of the same address had earlier met Dare Obadina and Azeez in a critical condition. A search was conducted inside the studio and the generator, condoms, bread and food that the deceased vomited and substances suspected to be hard drugs, including Indian hemp were found in the studio.

“Meanwhile, one Muritala Azeez, the owner of the studio, who is already in custody, admitted to having hired and kept them there and identified them as artistes who produce music for him. He further stated that he was with them physically on the previous night and later on the phone with them until 2am of September 3.”

Further investigation is currently being carried out by the State Criminal Investigation and Intelligence Department, Panti, Yaba, where the case has been transferred to.

Confirming the case, the Lagos State Police Public Relations Officer, SP Muyiwa Adejobi, said, “Two were found dead while another two were unconscious and rushed to the hospital including the manager of the studio. Preliminary investigation showed there was a generator working. Maybe the fumes of the generator caused the problem but we won’t just say that because we need medical expertise to reveal it. There is no suspect for now because even the owner of the studio was also unconscious.”