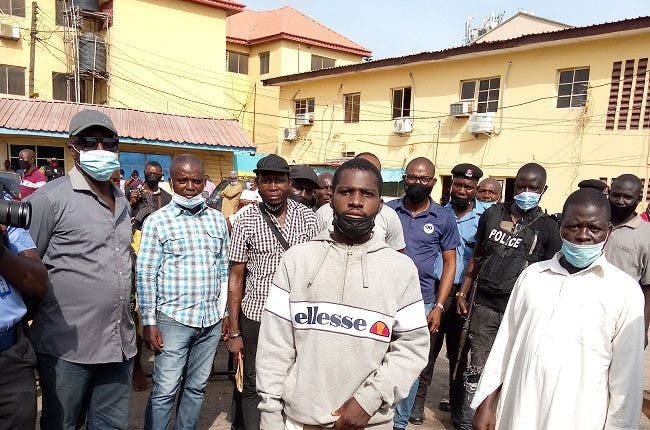 The suspect was arrested along with his accomplice, 48-year-old Segun Olusola, for using Elegushi’s name and photograph to swindle an undisclosed woman resident in the United Kingdom of N51 million.

The two suspected fraudsters were said to have extorted the money from the unsuspecting woman in exchange for a sham marriage proposal and rites.

Following an intensive investigation into the case, the police succeeded in apprehending Olusola who claimed to have received only N3.5million from the deal.

Tribune reported that the prime suspect, Olaitan, who posed as Oba Elegushi had proposed marriage to the victim whom she met on Facebook.

The suspected narrated that he engaged the lady on the social media app after discovering her affluent background after going through her profile.

Olaitan revealed that since she reeked of wealth, he did not find it hard catfishing her.

He only had to pose as also a very rich and flashy royal monarch living in the highbrow area of Lagos to achieve his aim.

“Before then, I had some pictures of Oba Saheed Elegushi on my Facebook account. I downloaded more and changed my Facebook profile to perfect the purpose of what I wanted to do and I sent a friend request to her and she accepted me and we became friends. We chatted every day.

“One fateful day, I told her that she was beautiful and I wanted to marry her and that the only thing that would stop me from marrying her is that she would have to perform some traditional rites and it will cost us a lot of money which she agreed to perform,” he said.

According to the suspect, he was already sleeping when the victim called him to send his account details for the marriage rites.

“I don’t have an account number, the first person that came to my mind was Mr Segun and I went to him and explained what I wanted to use the account for and I promised to give him some of the money after receiving it.

“A week after, she sent the money into the account I provided and I gave him N2.1 million, while I took the remaining money,” he said.

Parading the two suspects, State Commissioner of Police, Hakeem Odumosu confirmed that that the suspects stopped chatting with the victim after they had collected the money.

Odumosu also assured that the suspects would be charged to court as soon as investigations are concluded.

Related Topics:FeaturedTwo arrested for impersonating Oba Elegushi in N51m marriage scam
Up Next