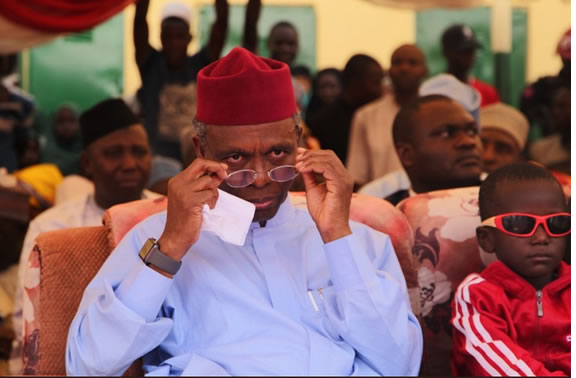 Nigerians on Twitter have lampooned Kaduna State Governor, Nasir el-Rufai for consistently tweeting in violation of the Federal Government’s order prohibiting the use of the platform after its suspension on Friday.

WUZUPNIGERIA reported that the Attorney-General of the Federation and Minister of Justice, Abubakar Malami, SAN, had given a directive for the immediate prosecution of persons who still use Twitter after its ban.

Despite the restriction which has been effected by telecommunications companies and internet service providers, affected Nigerians are able to access Twitter using Virtual Private Network (VPN) services that can work around network restrictions.

Past and present government officials, including Governors Seyi Makinde (Oyo State) and Rotimi Akeredolu (Ondo State), as well as Senator Dino Melaye, Senator Shehu Sani, amongst others, have tweeted after the ban and prosecution orders were announced on Friday and Saturday respectively.

However, on Sunday evening, El-Rufai drew the wrath of some Twitterati when he tweeted a story link with the caption “Based Nigeria: African country teaches US lesson in how to handle Big Tech tyranny,” supposedly by using VPN.

Reacting to his tweet, a former presidential aide, Reno Omokri, wrote: “Dear @MalamiSAN, @elrufai tweeted this 20 minutes ago in violation of your #TwitterBan. If you do not start your arrest and prosecution with him, then you must admit that you are a failure and a man who does not keep to his word.”

Another user, @AimThaMachine_ informed the governor he would likely spend time behind bars with other Nigerians when the government begins prosecution of offenders who violated the ban by accessing Twitter.

“Good evening Governor Nasir Ahmad El-Rufai, according to the Attorney General of the Federation, Abubakar Malami @MalamiSan you tweeted on a Ban Platform, Twitter. Sir, you are going to Jail with the rest of us. Prepare to sleep in prison. Cc: Garba Shehu and Lai Mohammed,” he wrote.

@topsyseunfunmi added, “The US has strong institutions while Nigeria institutions are weak. Trust me, if you are abroad, you will be cooling off in the prisons with taxpayers fund.”

This is just as another tweep, @ThreeLeftThumbs accused the governor of retweeting fake news.

“Lol. See who El Rufai is retweeting. RT News that’s is a major disseminator of fake news and spreads propaganda for the Russian govt,” the user wrote.

@idolax told El-Rufai that “It will be my pleasure to share same cell room with you since Malami has promised to jail all of us. Welcome to prison room 306 in advance, your Excellency.”

Another tweep, @DrEffiongJohn added, “And you have to use VPN to still tweet this on Twitter that has been banned by the government you support so much. I was thinking it would be better to have posted this on that craw craw app by @adamugarba(former presidential aspirant Adamu Garba). You guys constantly prove the adage, YOU CANNOT SHAME THE SHAMELESS!”