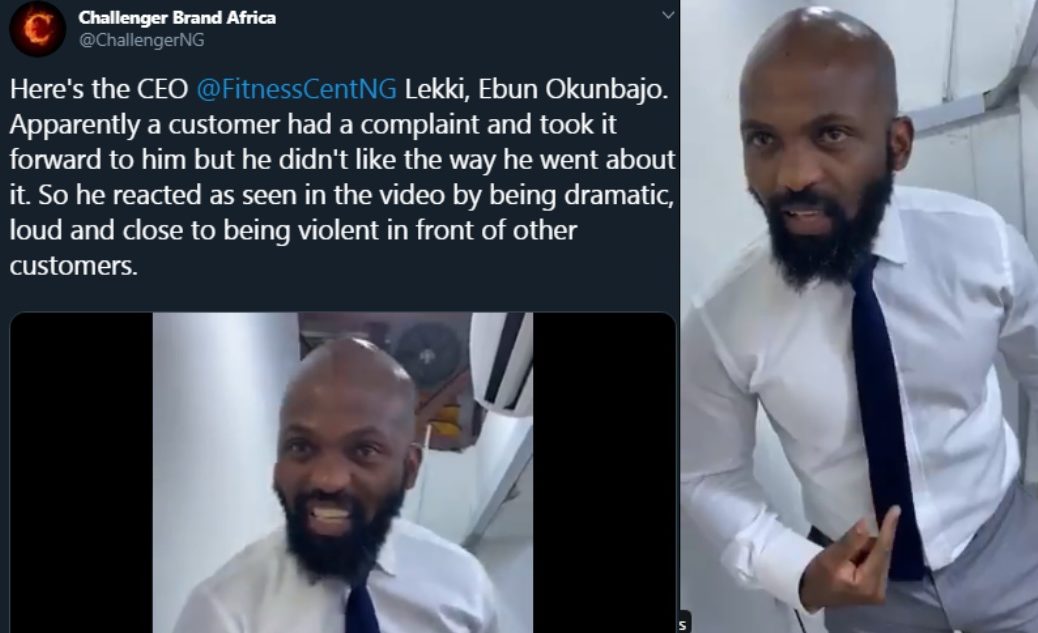 The Nigerian Twitter community is in a rare and what looks like a never-seen-before mode this evening.

It is widely believed that social media users hardly verify information before switching into a rage while reacting to viral stories, but that notion was negated today.

A Twitter user had shared a video of Ebun Okunbajo, who is said to be the CEO of Fitness Central located in the Lekki area of Lagos yelling at a supposed customer.

“Here’s the CEO @FitnessCentNG Lekki, Ebun Okunbajo. Apparently a customer had a complaint and took it forward to him but he didn’t like the way he went about it. So he reacted as seen in the video by being dramatic, loud and close to being violent in front of other customers.”

Rather than jump on the bandwagon in their usual manner and start unleashing rage on Okunbajo, many Twitter users are questioning the handle that tweeted the video to explain what transpired between the CEO and the supposed customer which led to the outburst.

Since the footage went viral, many Twitter users have taken to the microblogging site to defend the fitness center boss as a gentleman who must have been extremely provoked before the incident that was filmed.

Probably expecting to rile up Twitter users with the video, the handle that posted the viral footage has been receiving backlashes for posting half story.

Some social media users also said the poster is trying to doctor the truth behind what transpired between the supposed customer and the business owner to paint Okunbajo in bad light.

I worked with Ebun in strategy to help launch Ez wash and Dry at Ozone cinemas in yaba.

Ebun has excellent people skills, makes no sense how he will just get angry over a compliant. https://t.co/mO6gYJO6V4

You uploaded this video so that we can do what exactly? This is 2020, people should stop telling one sided stories. This man apparently has had enough of some bullshit from the said customer. Let’s have the fulll story…I love the guy’s energy and confidence though.

About the woman and the Gym CEO, Ebun, I’m going to be very neutral. Customers can sometimes be very unreasonable and insensitive especially when dealing with business owners and employees because they feel they are doing ‘them’ a favour by patronizing them. Again, we have . . .

Lmao… I Sabi Ebun…. See let’s know what d customer did abeg… For him to be this angry mehn forget the guy don vex ham….. Let’s hear from both side https://t.co/1rv35tjvS6

Ebun worksout at the gym too .. it took me a year to even know he owns that gym … … good to his clients and good to his staffs… Terrific young lad ! https://t.co/H6Kjmyz10u

I don’t like half storie, Let is have the full gist before judging him. And also no man would react like this if he is not push to the wall and for him to say “Record it and put it anywhere you want” then Ebun knows what he is doing. https://t.co/RvvW1BiTIY

Firstly, what was the antecedent of the conversation? Why is she only putting the part where he responds not how it all started?
Sometimes, we really need to be careful of information being put on here. There are always two sides to a story.

Ebun is my former boss,

If he’s this agitated, Best believe the customer overstepped bounds by thousands of miles.

He doesn’t joke with customer relations.

I know this guy very wel bec I was a memeber of that gym for years..sincerely he is a cool headed guy don’t know what happened here but I av nvr seen him this way before

The Handler Of This Handle Is A SYCOPHANT. This Guy Actually Showed Restrain And Never Close To Being Violent; He Was Only Obviously Agitated By Something YOU Never Showed To The Public. And The Best Line I Got From This Video…”Customers Have Responsibility”…@woye1

Nah we need to get full details of the story or else you are harassing him & this page would get reported. You cant soil his reputation without giving the Full Story because this seems like it’s the Customers fault.

Thank you for this promo. I’ve been thinking of a gym around Lekki area & this solves it. I like that he kept reiterating that his gym won’t condone bad behavior & that customers have responsibilities. We won’t applaud cyberbullying of Business owners with one sided narratives.

Speculation sis. The person who posted one side has not done so with equity. In law we have the equitable maxim “audi alteram partem” meaning “let all parties (or let the other party) be heard. We can’t judge until both sides are aired.

I’m proud of the way Nigerians jumped on the tweet to defend Ebun demanding for a full clip of what transpired and not believing a one sided story. This is so refreshing to see on Twitter NG. 😀