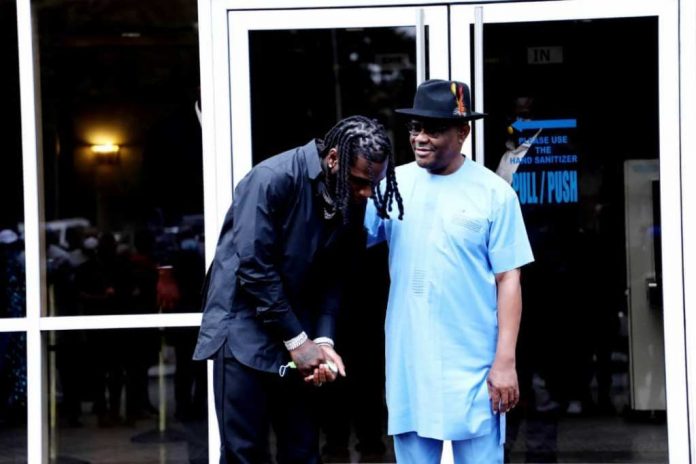 The Afro beats star, his parents, and the management team had visited Wike at the Government House in Port Harcourt, the state capital, on Saturday.

Reports suggested that the ‘Twice As Tall’ singer was awarded a landed property at the Old GRA, Port Harcourt as well as money to construct a building.

However, in a viral video on the bird app, the governor promised N10m each to other artists who came out to perform during a hosting ceremony(homecoming concert) held for the Grammy winner.

Wike o😂😂😂 Daddy Wiks says he’d give all artistes that performed tonight N10m each🌚 That hailing from Burna though 😂 pic.twitter.com/OGBDp4vUai

Reacting to the development,  one user wrote: “Lmao Burna boy will come on Twitter to drag politicians, he’ll call them looters and all but see the hypocrite hailing Wike after receiving N10M. Teachers are being owed 5 years salary in the same Rivers State o.”

Another user tweeted: “When they say Buhari is not working. This is what they mean. They miss the government of share the money which is why @burnaboy could not politely ask Wike to use that money to pay the five-year unpaid salaries of teachers in demonstration schools in Rivers State.”

“Burna Boy and the rest of the artistes will collect N10M each from Wike and celebrate it here. Next day they will tweet about lack of infrastructure and focus on Lagos State. Have they ever ask Wike about End SARS Judicial Panel of Inquiry,” another user wrote.