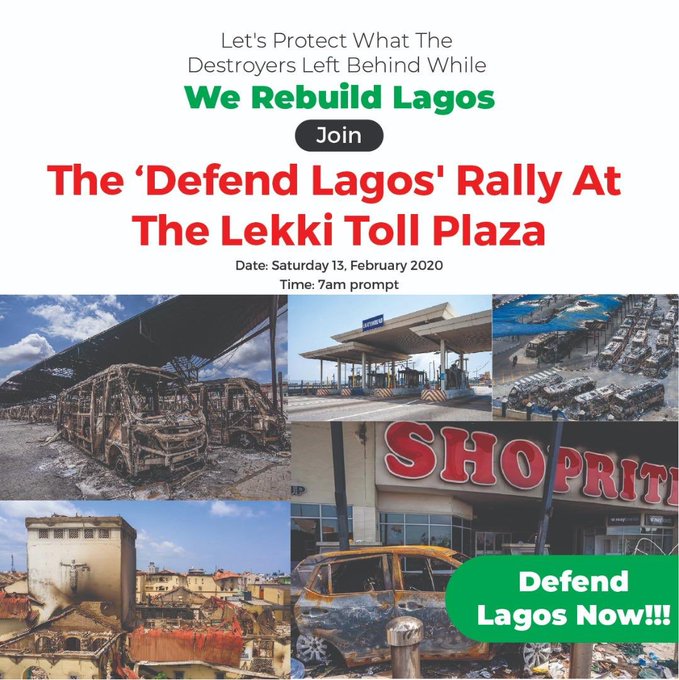 The planned reopening of the Lekki Toll Gate has set the stage for a possible clash of Titans amongst Lagosians with a new faction ready to #DefendLagos with a counter-protest against the #OccupyLekkiTollGate supporters.

Yesterday, WuzupNIgeria reported a planned protest slated for February 13th at the Lekki Toll Gate, the scene of an alleged shooting of #EndSARS protesters by soldiers last year. The Nigerian Army has denied it shot at peaceful protesters.

The #OccupyLekkiTollGate was triggered by the Judicial Panel of Inquiry set up by the Lagos State government to investigate the October 2020 Lekki shooting incident two days ago when they approved the reopening of the Lekki Toll Gate.

It appears that the planned reopening of the toll gate will do more than restoring one of the government’s sources of revenue but also a wound yet to heal, hence, the promoters and supporters of the planned #OccupyLekkiTollGate protest believe that the move is a spit on the grave of the alleged 12 casualties of the Lekki shooting by soldiers, according to Amnesty International report.

Meanwhile, the Chief Press Secretary of Governor Babajide Sanwo-Olu began a counter hashtag last night following the rise of the resistance to the planned reopening of the toll gate.

Gbenga Akosile, began the #DontLetThemBringLagosDown(a ship which did not fail but could have triggered #DefendLagos), said “nobody will bring our dear Lagos State down! Their rights end where other people’s rights begin.”

However on Monday night, a tweet by one of the promoters of the #DefendLagos counter-protesters, Olusoga Owoeye charged Lagosians to gather at the Lekki Toll Gate on the same day to stage a counter-protest against the #OccupyLekkiTollGate.

His tweet read: “Show your love for our Lagos. Get your friends and your neighbours to be there. Join The Defend Lagos Rally at the Lekki Toll Plaza on the 13th of February. We will not cede our city to criminals and insurrectionists. Lagos is our Pride.#defendlagos #DemNoBornYourPapaWell”

The tweet labelled #OccupyLekkiTollGate supporters who are yet to respond as criminals and insurrectionists and the second hashtag (#DemNoBornYorPapaWell) sounds more like a threat or a dare to their opponents who have, till date, not levelled a threat against the government or Lagosians.

Follow some other tweets form supporters of the #DefendLagos counter-protesters below:

Show your love for our Lagos. Get your friends and your neighbors to be there. Join The Defend Lagos Rally at the Lekki Toll Plaza on the 13th of February. We will not cede our city to criminals and insurrectionists. Lagos is our Pride.#defendlagos #DemNoBornYourPapaWell pic.twitter.com/NdRE77zHet

No one has monopoly of madness. The destruction of Lagos by the foolish lots is enough. This time we are going to #DefendLagos and #DemNoBornYourPapaWell to do any how. pic.twitter.com/3wSPQuIzwj

We may not be the loudest but we are the most ruthless when it comes to protect the things we cherish.

Again, #DemNoBornYourPapaWell to embark on your planned mission to annihilate our Heritage.

It remains a life-defining event for most of us that stood gallantly during the last #EndSARS protest, but as much as we demand justice for the victims of the #LekkiMassaccre. I won’t support another #OccupyLekkiTollGate, we must #DefendLagos at all cost. pic.twitter.com/Tp8SI5U38G

#DefendLagos the pride of Yorubaland against IPOB TERRORIST ORGANISATION and PeeDP.

#OccupyLekkiTollGate: Nigerians to stage another protest against reopening of toll gate