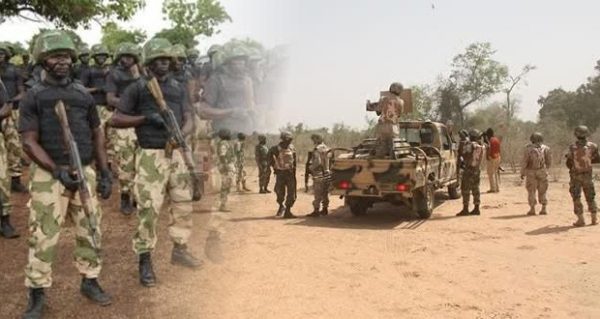 The Acting Director, Defence Media Operations, Brig.-Gen. Benard Onyeuko, on Tuesday disclosed that the enclaves were located at Chindila town in Yobe and Mayankari in Borno.

Onyeuko said the troops of 233 Battalion on Monday, made contact with the terrorists during an aggressive clearance patrol at Chindila village.

He said the troops engaged the terrorists with fierce volume of fire and neutralised five of them in the process, while some escaped with gunshots wounds.

Onyeuko said that three AK 47 rifles, five magazines and 17 rounds of 7.62mm ammunition were recovered from the encounter.

He said the troops were still in pursuit of the criminals, adding that they had continued to dominate the general area.

He also disclosed that troops of 151 Battalion, 202 Battalion and elements of Multinational Joint Task Force on fighting patrol also eliminated three terrorists at Mayankari on Monday.

According to him, while others escaped with gunshot wounds, three AK 47 rifles, one solar panel and one improvised explosive device making equipment were recovered.

“The troops thereafter destroyed their hideout after the encounter and exploited the general area in search of the escaped criminals,“ he said.

He said the successes recorded by the gallant troops of Operation Tura Takaibango against the Boko Haram/ISWAP main hideouts, was an indication of their submission and end of all criminal elements within the North-East.

“The troops are highly commended once again for their dedication and dexterity in flushing out remnants of the terrorists from their hideouts.

“They are also encouraged to continue on the path of the successes so far recorded,“ he said.

He assured the people of the North- East region of renewed vigour and zeal to crush the remnants of Boko Haram/ISWAP criminals from their enclaves in the zone.