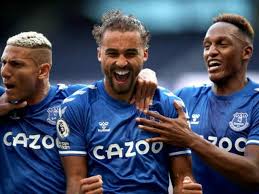 Everton’s impressive 1-0 victory at Tottenham Hotspur on Sunday was their first against them for eight years, but of greater significance was the impact of their new signings.

Optimism was hardly high at the end of the last campaign as Everton finished down in 12th place.

But it has returned in waves after Carlo Ancelotti signed a midfield trio that looks capable of turning Everton into genuine contenders for a place in the top six.

Colombian playmaker James Rodriguez, who burst into the limelight at the 2014 FIFA World Cup before signing for Real Madrid, was a major coup for Everton when he signed this week.

His stock may have fallen in recent seasons but against Tottenham he looked a class act, pulling the strings and giving Everton the creativity they have been so badly lacking.

French powerhouse midfielder Abdoulaye Doucoure, signed from Watford this week, was a dominant presence in the middle of the pitch.

Allan, a technical Brazilian, provided calm assurance in front of the back four.

Dominic Calvert-Lewin, whose thumping header sealed the points, said the trio had given Everton an instant uplift and predicted there was much more to come.

Ancelotti described his team’s performance as brilliant and picked out Rodriguez, a player he worked with at Real Madrid, for particular praise.

“James is not the fastest player in the world but he has a lot of quality. We have to use him to show his quality. He is not a winger, but he can come inside and receive the ball. He is very dangerous,” Ancelotti said.

Everton fans have had to watch Liverpool take over as the force in English football, but after some stunning transfer business and a win against a bogey club, there is hope.

“After a long time of suffering now, the fans have to be happy. It was not easy in the past to win here and we won, it’s good to celebrate,” Ancelotti said.

“We need continuity. Last season we were up and down and now we will see. This game tells us we can compete with anyone.”

Neymar, four others sent off as Marseille grab rare win at PSG