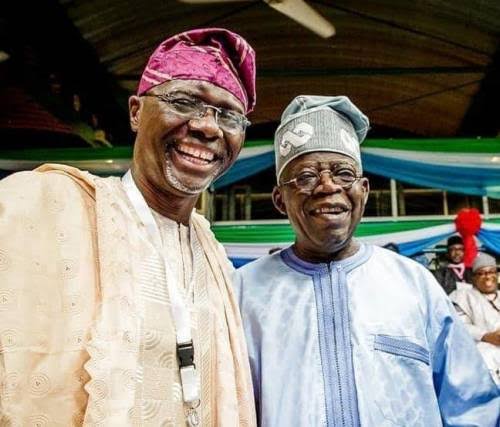 Governor Babjide Sanwo-Olu of Lagos State has hailed the national leader of the All Progressives Congress,  Asiwaju Bola Ahmed Tinubu on his 69th birthday.

Sanwo-Olu’s birthday wishes to the former Lagos State Governor are contained in a statement released on his verified Twitter handle on Monday.

Born on 29 March 1952, Tinubu governed Nigeria’s commercial center for eight years from 1999 to 2007 under the defunct Action Congress before handing over to Babatunde Raji Fashola after two terms.

Sanwo-Olu described Tinubu, fondly called Jagaban,  as a pathfinder and a statement with unforgettable contribution to Nigeria’s democracy.

His statement read: “Hearty congratulations to our great leader, Asiwaju Bola Ahmed Tinubu on the joyous occasion of his 69th birthday.

“Asiwaju is a statesman and builder whose contribution to a progressive and democratic Nigeria can not be quantified.

“As a pathfinder, Asiwaju charted the developmental trajectory of modern Lagos, raising the bar of governance and public service in Nigeria.

“As he marches forward on to a higher pedestal, may the Almighty go with him every step of the way.

“On behalf of my wife, the government and the good people of Lagos, I wish @AsiwajuTinubu many happy returns in good health.”