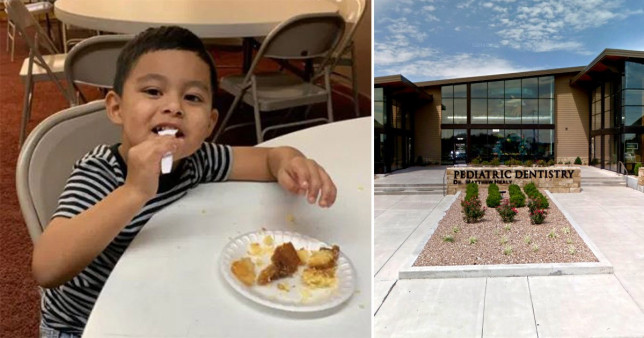 A three-year-old boy identified as Abiel Zapata died during a routine trip to the dentist to have several teeth pulled out due to a gum infection.

According to Metro UK, Zapata passed on Thursday after visiting the Tiny Teeth Pediatric Dentistry in Wichita, Kansas, after he had an ‘unexpected reaction’ to the anesthetic used to sedate him.

The dentist was said to have sedated him for the procedure according to his mother, Nancy Valenzuela, whose last words to her son were ‘you’re going to be fine’, reports KSNW.

She told the TV network that Abiel cried when he had the injection but told her son’‘Papi, everything’s going to be OK’.

According to a police incident report, about three minutes after the boy had been sedated and while the dentist worked on his lower jawline, Abiel’s pulse began to slow down and his cheek swelled up.

The boy was then given CPR and rushed to a nearby hospital where he was pronounced dead.

His heartbroken mother, Nancy, said she never got to see her son before he died.

‘We didn’t expect to come out of there without a child’, she said.

A Wichita police spokesman told KAKE-TV that Abiel likely suffered an allergic reaction to the medic used to sedate him for the procedure.

‘It is believed that the child had an unanticipated reaction to medicine provided during the course of his dental procedures’, said officer Trevor Macy, adding that there isn’t any criminal investigation into the heartbreaking incident at the moment.