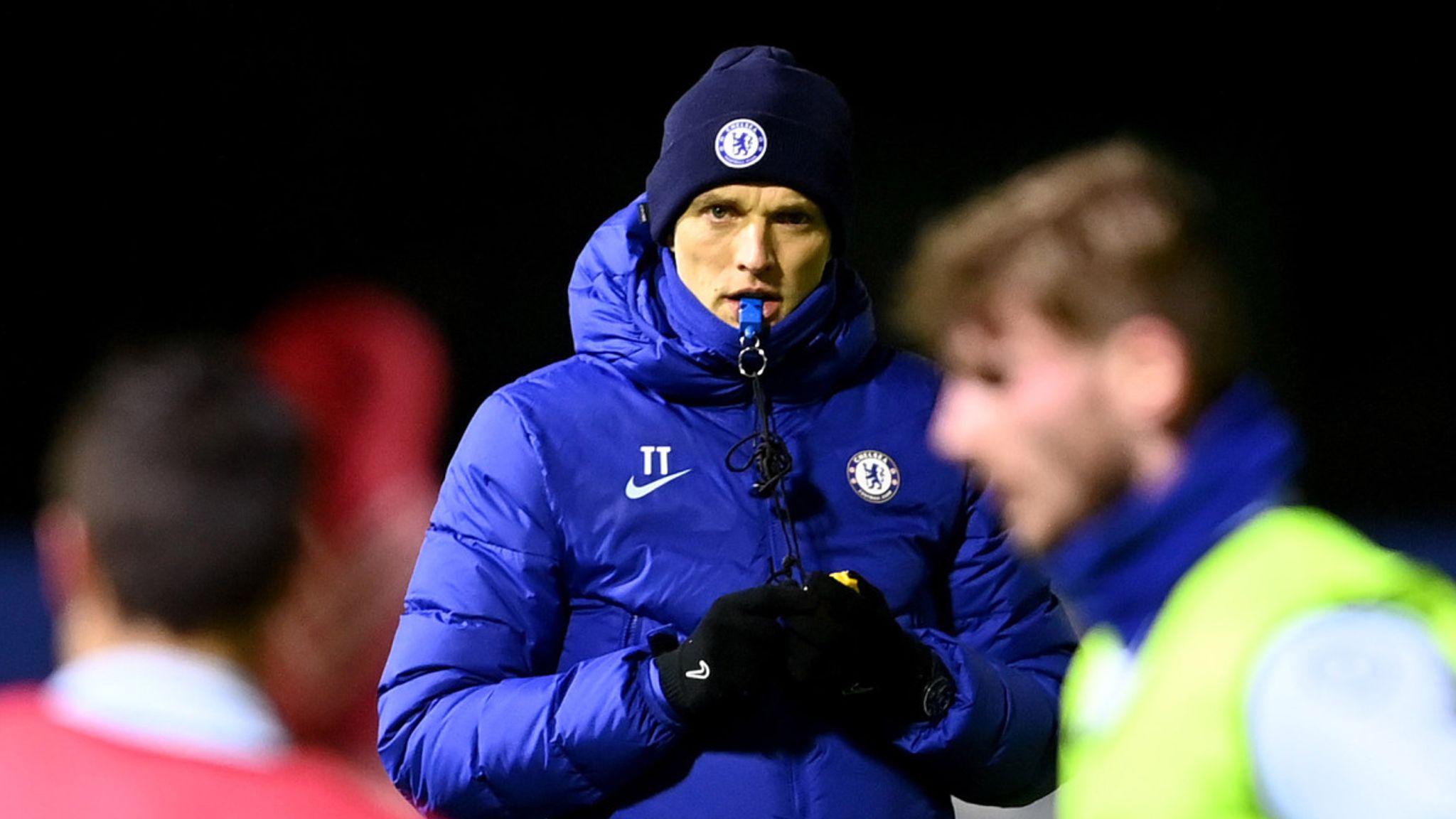 German coach, Thomas Tuchel, has signed a one and half year deal to become the new head coach of Chelsea following the brutal sack of Frank Lampard.

Tuchel, who himself was booted from his last job France as the head coach of Paris Saint Germain a month ago, has inherited a quality squad that boasts of a lot of potentials and stars, as well as, their financial firepower, should he decide to break the bank for a top star – be sure that Roman Abramovic has him covered.

The 47-year-old was born in Krumbach, West Germany to Rudolf (a retired football coach in Krumbach, Bavaria, Germany) and Gabrielle Tuchel (a housekeeper), and at the age of nine, he reportedly had the intentions to become a rescue helicopter pilot.

His father, Rudolf was his first coach when Tuchel began his footballing career at TSV Krumbach under his dad’s supervision. We can credit his dad for teaching the basics of football, and as well, getting him to love the beautiful game.

Life at Chelsea begins for Tuchel today when he manages his first game as the head coach of tenth-placed Blues against Wolves at the Stamford Bridge in the Premier League, here are five things you should know about Tuchel.

Tuchel is rumoured to have started his career as a midfielder at local club TSV Krumbach, he established himself as a defender but never really made it to limelight despite being talented.

Tuchel departed Krumbach for the academy at FC Augsburg in 1988 but failed to make a single appearance for Augsburg’s senior side before he released by the club after turning 19.

The shut door at Ausburg opened up an opportunity to play in the Bundesliga II for Stuttgarter Kickers in 1992 and Tuchel grabbed it but unfortunately, after making eight league appearances for Kickers in the 1992–93 season, Tuchel was dropped the following season. He registered only one goal.

After the 1993–94 season, Tuchel went on to join fourth-tier SSV Ulm and made 69 league appearances for Ulm as a central defender, scoring two goals.

Sadly, in 1998, at the age of 25, Tuchel said goodbye to football after being forced to retire a result of a chronic knee cartilage injury.

Leaving behind the nightmare of his footballing career, Tuchel ventured into coaching and it was there he became famous.

He bagged his first coaching job in 2000 as the youth team coach of VfB Stuttgart, developing the likes of Mario Gómez and Holger Badstuber, who became future first-team players.

In 2005, he returned to Augsburg, who were impressed with his ability at coaching youth players, and was appointed youth team co-ordinator.

After three years at Augsburg youth team, Tuchel became head coach of a first-team for the first time after being offered the position as at Augsburg II for the 2007–08 season. Tuchel coached a team that included Julian Nagelsmann who is now RB Leipzig’s head coach.

In 2009, Tuchel bagged his first Bundesliga job, when he took over Mainz 05 from Jürgen Klopp, who left for Borussia Dortmund. In his first season, he led the club to a 9th-place finish, working with the likes of Ádám Szalai and André Schürrle.

However, on 11 May 2014, Mainz reluctantly granted Tuchel’s request to be released due to the club’s inability to fund his plans.

“I couldn’t see how we could reinvent ourselves once more the coming summer,” Tuchel said, leaving Mainz with a record of 72 wins, 46 draws, and 64 losses, from 182 games.

After over a year away from management, Tuchel returned to football and took over Borussia Dortmund on 19 April 2015, replacing his Mainz predecessor, Jurgen Klopp.

Tuchel won his first-ever major trophy as a coach as well as the club’s first trophy in five years when they beat Eintracht Frankfurt 2–1 in the 2016/17 DFB-Pokal cup, with goals from both Dembélé and Aubameyang.

The German tactician guided the French outfit to back-to-back league titles as well as the Coupe de France and Coupe de la Ligue as well as their first-ever the Champions League final, spending two and a half years with the Parisian club.

Nicknamed “The Professor”, Tuchel developed himself to be a tactical coach and he is revered for his tactical knowledge and style of play. He has coached four clubs before Chelsea; asked to be released by Mainz and sacked twice by two top clubs.

Kicked out at Dortmund:
Despite leading the club to their first trophy in five years with the DFB Pokal, Tuchel was fired three days later on 30 May 2017. Spending at least two years at the club after signing on 19 April 2015.

Tuchel might have won four trophies at PSG (Two Ligue 1 titles, Coupe de France and Coupe de la Ligue cups), it did little to affect the club’s decision to fire him from the job as the head coach on December 24 2020, a day to Christmas.

The world would be watching how his time at Chelsea will end where the club owner, Abramovic, has a thing for sacking coaches. Jose Mourinho, Carlo Ancelotti, Claudio Raineri, Rafa Benitez, Antonio Conte and Frank Lampard have all been shown the exit door at the club irrespective of their achievements.

Fall out with previous employers

Though he is respected for his tactics and playing style, Tuchel has endured coaching career has also been marred by his fractious relationships with his employers. It happened in Dortmund and PSG, who knows what will happen with the money man at the Bridge.

According to official records, Tuchel publicly criticized Watzke after he conceded to UEFA’s demand that the club play their Champions League quarter-final first leg match against Monaco on 12 April 2017, one day removed from the team’s bus being bombed.

The departures of Hummels, Gündoğan, and Mkhitaryan which was sanction by Watzke left bad blood between him and the club – who guaranteed the players would not leave.

From Watzke to fallout with club stalwarts Roman Weidenfeller, Neven Subotić, and Jakub Błaszczykowski. His aim to replace the trio purportedly did not sit kindly with Watzke.

The straw that broke the camel’s back came when Tuchel aimed to sign defender Ömer Toprak in 2016, a move allegedly blocked by Watzke and chief scout Sven Mislintat, the latter of whom was effectively banished from the training ground after an argument with Tuchel.

An according to reports, the club also chased midfielder Óliver Torres behind Tuchel’s back in 2017.  Toprak eventually joined the club following Tuchel’s departure, while Torres joined Porto.

History repeated itself at PSG: Tuchel began his final season at the club with a bad record by leading the club to two opening league game defeats, PSG’s first since the 1984–85 season after losing 1-0 to newly-promoted Lens and rivals, Olympique Marseille.

The Le Classique became infamous for its disciplinary issues, with 17 cards shown (the most in a single Ligue 1 game in the 21st century), while five, including Neymar, were sent off following an injury-time brawl.

Tuchel’s tenure at PSG was marred by a fractured relationship with the club’s hierarchy. In an interview with German television station Sport 1, he said he felt “[more like] a politician in sport” than a coach.

These comments, as well as his previous criticism over the club’s transfer activity, were condemned by PSG’s sporting director Leonardo, who said Tuchel “[must] respect the people above [him]”, and labelled the comments as damaging for the club.

Tuchel and his inner circle:

Just like Jesus and his disciples, Tuchel is known to remain loyal to his trusted team member who he carefully selected. But unlike Christ who had a famous 12, The Professor has a group of eight trusted inner circle and the first would shock you.

Top of the list is SISSI TUCHEL, who happened to be his wife. She is the woman behind the successful Tuchel (married people will understand better).

The Sun Uk reports that Sissi who is not involved in footballing decisions, Sissi Tuchel is said to be a huge support to her husband of 11 years. It is believed she has a big say on his career choices, where he chooses to manage and acts as a sounding board for him when the chips are down.

It is fair to call her the forerunner as Sissi reportedly visited Paris the summer before Tuchel was sacked in 2017 by Dortmund to seek a home for them to live in with their two daughters ahead of his appointment at PSG. She must have already looked into a life in London for the family.

Then there is ARNO MICHELS, ASSISTANT who has worked exclusively with Tuchel as his assistant manager since their days at Mainz.

The Sun reported that they met when they were learning their coaching badges and Tuchel was adamant Michels would be his assistant, wherever he went, including at Borussia Dortmund and PSG.

Tuchel also has OLAF MEINKING as his AGENT, a VIDEO ANALYST named BENJAMIN WEBER who has worked with him since his days at Mainz.

ZSOST LOW, COACH  – he was previously coached by Tuchel in Mainz and teamed up with him after inpressing as RB Leipzig’s assistant coach.

ZOUMANA CAMARA and PHILIPP SCHELB, as his SET-PIECE SPECIALIST and SPECIAL ADVISER respectively.

RAINER SCHREY, FITNESS COACH: Described as a mastermind of physical preparation, Schrey has worked with Tuchel since 2011.

Related Topics:ChelseaPSGThomas Tuchel
Up Next

Chelsea vs Wolves: What Tuchel told Abraham, others ahead of debut