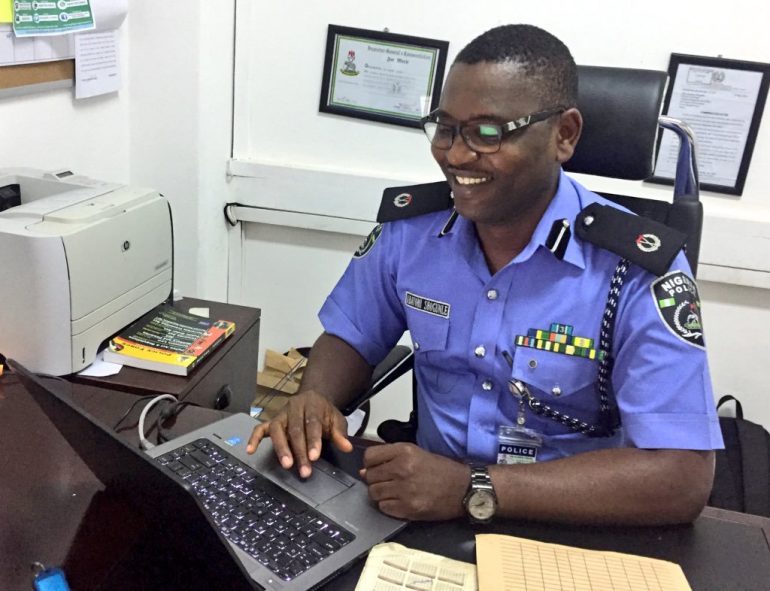 Nigerians have taken to their Twitter handles to slam the Assistance Commissioner of Police, Abayomi Shogunle, for defending operatives of the Special Anti-Robbery Squad.

Shohunle, who took to his Twitter handle to defend the modus operandi of the SARS officers said posted an alleged photo of himself counting money and holding a newspaper inside a cab.

He further alleged that he was on his way to Ekiti State and no one (SARS) asked him How far? adding that he counted the money he was holding at every checkpoint to attract the officers, but still, none of them stopped him.

Me (at the back seat of a Cab) on my way to Ado Ekiti from Ibadan earlier today.
I deliberately counted money at every police/security check point on the road to see what will happen.
For the three and half hours journey nobody asked me “how far?”.#EndSARS.@PoliceNG_PCRRU pic.twitter.com/LZ2EsWUZJd

If I call you a FOOLISH person now. You’ll say I lack respect and then you’ll block me. but in all sincerity this thing you just did, sit back and reflect in your corner “DOES IT MAKE SENSE” . YOU displayed foolishness and ya actually proud.. ah.. This country is gone.

Cab you said. Look at the narrative, you’re not a “young man” with a Mohawk hairdo. I guess you wore a native attire and not a polo shirt with collar raised up. You have no tattoos I suppose and no gold chains on. Now which SARS official will see you as a prey?

Back seat of a cab he said not even the driver. Abeg drive danfo first

Lol the story tire me. I pray he witnesses his boys in action one day.

Even if he does how are we sure he will say the right thing. I’m sure they know him even no need

Before sars must end or be reformed, this Shogunle has to be relieved of his duty first. The guy is a menace to this nation

Oh so this is your evidence? Oga haba now. Stop joking with our intelligence like this.
If I had shown you this picture as my only evidence of money on me before being extorted by your men, would you take it as tenable evidence for the PCRRU? Fear God small abeg.

Fantastic. He keeps insulting our collective intelligence. So hand,wristwatch,newspaper and currency notes WHO GET AM?

We are praying for you so you can be delivered from the spirit of lies.
Be deceiving yourself.
Yen yen yen pic.twitter.com/jmadf7C0ND

This tweet is synonymous to “Bail is a free”. pic.twitter.com/fEJmBWzlr5

This is fake news according to you. No video, no time, no place… Purely no evidence. Thank you.

According to what you preach on twitter, this is no evidence. No video, no audio, no place and no time. You can keep on acting like FSAR menace ain’t real. #Endsars

Not many people make a mockery of the sufferings of Nigerians like this man.

Keep deceiving yourself Oga. I returned from same road 3 hours ago and I saw your men in action. May God help u with your money-counting venture. Amen

Can this man just get off Twitter? This is becoming sickening.

submit your case with the following:

We will look into it.

This is so childish of you sir.

Me in front of my laptop searching for comparable sense donors for you pic.twitter.com/DidQ1sabJw

Are you sure this is Yomi Shogunle’s handle sha ?

Why everyone connected to this government behaves and act the same way?

Have you seen policemen asking the passenger for money Mr oga? You think they will ignore the driver and focus on you the passenger? Haba oga, try another gimmick jawe

You are a wicked man. How can you be supporting evil even with evidence everywhere? God forbid.

You must be living in spiritual Nigeria, not the physical one.

Sir, next time, make a video. No evidence No case (it doesn’t work like that with your people though).

Having an honest Father is such a blessing. I can’t imagine my Dad pretending to be who he’s not. @YomiShogunle Father of pretence. Iba o iba 😂. #EndSARS

Chai! Bros, u fink we will fall for this? Ko jo!
Q1. Is it possible u even travel alone? Your boys will drive you na
Q2. Do you think they won’t recognise you?
Q3. So when they know its you, how can they as how far?

Bros , you should have greeted us happy new month and just go

Oga sir, I’m not saying you are lying but as a top police officer you definitely have an aide de camp, and also sure you have a driver, if that’s the case you weren’t alone in that cab, my case is backed by a strong evidence the 3 bottles of water right in front of you…🤔🤔🤔

WE WILL GET TO THE ROOT OF IT! INEC raises the alarm over cloning of PVCs