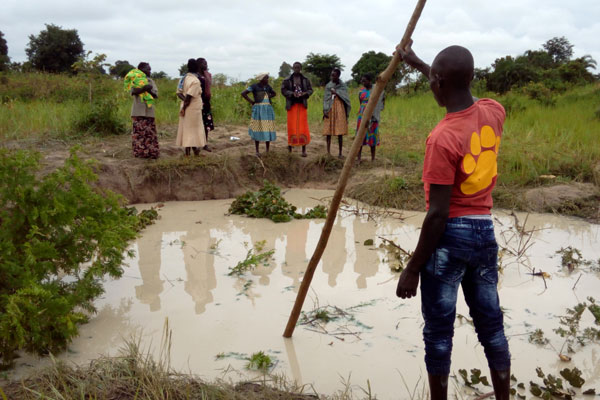 Four siblings on Monday drowned in a ditch when their parents left them at home to attend the burial of a relation.

Daily Monitor reports that the ditch in which the four children drowned had been used for bricklaying at Akume swamp.

They were reportedly found by another teenager who, at a distance, saw a young helpless child at the edge of the ditch crying and glaring at the ditch where her sisters and brother had drowned.

The children’s uncle, Mr. Emmanuel Ecabu, told Daily Monitor that soon after they had buried the remains of his sister, they received a telephone call announcing another sad news.

Mr. Ecabu said that Police had already cordoned off the scene, with the bodies already pulled out of the ditch.

“We immediately rushed home after burying my sister. To our shock, four of my brother’s children had drowned, contrary to earlier reports that it was only one.

“It’s a big loss to this family. These were the last four children in their mother’s womb and have died in order of their birth,”

He said the ‘killer ditch’ was dug by one Robert Elwagu, the deceased children’s elder uncle.

He wondered how the children ended up drowning in a ditch which was about a kilometre away from his home and that of his brother, Robert Elwagu.

He said he was now left with six children out of the 11 he had.

The East Kyoga Police spokesperson, Mr. Michael Odongo, said that Police managed to retrieve the bodies of the deceased children on Monday evening.

“We have opened a case file number 1303/204/2018 to investigate the circumstances under which the children drowned,” he explained; adding that the bodies had been taken to the mortuary for postmortem.