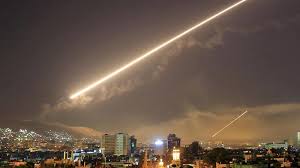 According to a Syrian News, citing a military source as saying that at approximately 4am (0200 GMT) “the Israeli enemy launched an air attack with rocket fire” from above the city of Tripoli in northern Lebanon.

“They hit some targets in the vicinity of Hama governorate.”

“Our air defences have responded to enemy missiles and most of them have been shot down,” the agency cited the source as saying.

So far, there has been no official comment from Israel.

So far in January, Israeli airstrikes on eastern Syria against positions manned by Syrian government troops and their Iranian allies killed 57, the Britain-based Syrian Observatory for Human Rights said.

Israeli strikes in Syria have been seen as an attempt to prevent Iran, one of Syrian President Bashar al-Assad’s main allies, from building up its military influence in the region.