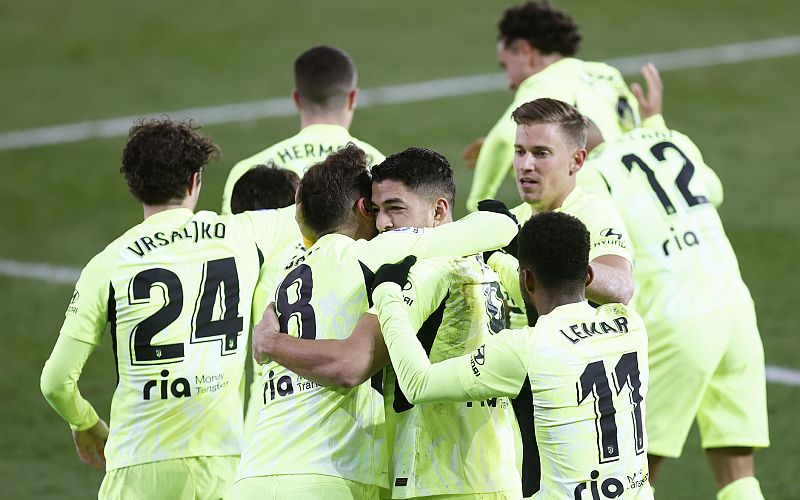 Luis Suarez’s double, including a late penalty kick, helped Atletico Madrid to snatch a 2-1 victory at Eibar on Thursday night.

Eibar took the lead through Serbian goalkeeper Marco Dmitrovic who slammed home a 12th minute penalty kick for what was, unsurprisingly, his first goal for the club.

It was also the first time a goalkeeper had scored in the division since Deportivo La Coruna’s Dani Aranzubia in 2011.

However, Uruguayan striker Suarez netted in the 40th minute to level for Diego Simeone’s league leaders.

They are now seven points clear of second-placed Real Madrid, having played one less game.

Dmitrovic pulled off a brilliant save at the other end to deny Joao Felix but he could not stop Suarez scoring the winner after a foul by Anaitz Arbilla.

The former FC Barcelona striker netted his 11th goal of the season from the penalty kick spot to win it for the capital club.

The goal took him level with former teammate Lionel Messi as the division’s top scorer.

Atletico Madrid signed Suarez cheaply from FC Barcelona in the summer with the Catalans keen to clear the 33-year-old’s salary off their wage bill.

But now he is leading the Rojiblancos in the direction of their first league title since 2014.

“He’s an extraordinary player and we are very happy that we have him with us,” said Simeone.

“He was active throughout. He found the goal after a loss of the ball and later for the penalty kick he generated it, made it, looked for it and finished it decisively.”

Earlier Valencia, 14th, drew 1-1 with Osasuna, who are 19th and two points from safety.

Jonathan Calleri sent the visitors ahead at Mestalla but Unai Garcia’s second half own-goal levelled the score, with the defender deflecting Yunus Musah’s cross-shot into his own net.

Japan doubles down on Tokyo Olympics, denies report of cancellation