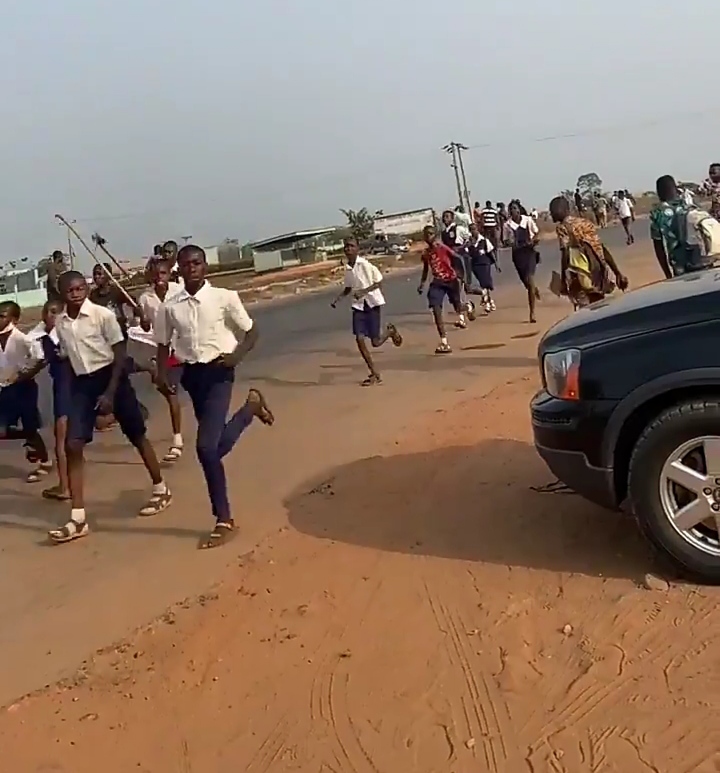 Students of United Comprehensive High School, Wasimi in Ewekoro Local Government Area of Ogun on Thursday morning, blocking the Lagos-Abeokuta expressway to protest against the alleged killing of their colleague.

The News Agency of Nigeria (NAN) learnt that scores of students of the school took to the road upon receiving news that an unidentified student was hit and killed by a vehicle when crossing the highway.

The protest by the students caused a gridlock both inward Lagos and outward Abeokuta with the motorists stranded for hours.

“This is to inform you about a crash which occurred at Wasimi village around Itori axis on the Lagos-Abeokuta expressway at about: 9:35 am.

“A Toyota space bus without number plate suspected to be ‘Tokunbo’ hit a Senior Secondary School girl who died immediately.

” As a result of this incident, some irate boys set the vehicle on fire, while two policemen who came to quell the crisis were wounded.

“Patrol operatives had earlier evacuated the body of the dead student to the morgue of the General Hospital, Ifo before the crisis erupted.

“The Area Commander, the DPO in the area and the Acting Unit Commander, FRSC; have brought the situation under control.

“Normalcy has returned to the area as the irate youths have left the road they earlier blocked and traffic is now flowing without interruption,” Umar said.