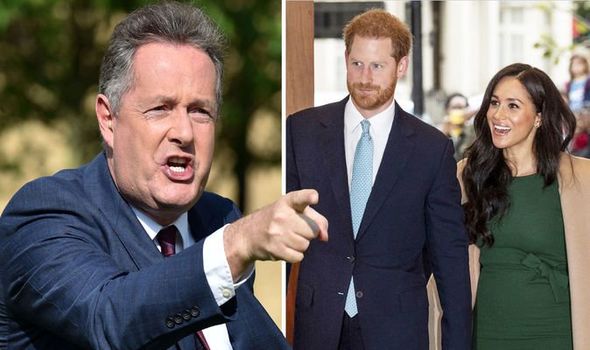 Piers Stefan Pughe-Morgan popularly known as Piers Morgan has demanded that Prince Harry and Meghan Markle be stripped of their royal titles “with immediate effect”.

Harry and Meghan resigned from their royal duties in January 2020. Although the duo moved to the United States, they still formally remain the Duke and Duchess of Sussex.

The rant of former ‘Good Morning Britain’ presenter – in which he dubs the Duke and Duchess of Sussex “Prince Poison and Princess Pinocchio” – was a reaction to the news that Harry is about to publish a tell-all memoir next year, Yahoo UK News reports.

MORE READING!  #BBNaija: I plan on making all male housemates fall in love with me - Maria

Morgan wrote in his column in the MailOnline: “I’ve said this before, and I now say it again: the Queen should strip Harry and Meghan of all their titles with immediate effect.

“Compel them to do this malevolent, manipulative cr*p in their names, not as royals.”

The news that Prince Harry is to publish an “intimate and heartfelt” autobiography about his life, “not as the prince I was born but as the man I have begun”, has sparked heated speculation as to what secrets he will reveal about the Royal Family and how they will feel about the book.

Morgan fumed: “To be blunt: Harry’s a sell-out, and this is just another example of him selling out.

“It’s sad, pathetic, and totally unnecessary, and it will obviously cause yet more pain to his grandmother who is still mourning the loss of her husband Philip.”

And he added: “Prince Poison has gone toxically rogue, and the royals should have nothing more to do with him or his wife Princess Pinocchio until or if they stop this horribly destructive vituperative rampage against them all.

“The memoirs are a slap in the face too far for a family that’s surely exhausted all collective patience with the Sussexes.”

However, recall that Morgan quit ITV breakfast show Good Morning Britain in March over comments that he made about Meghan’s interview with Oprah Winfrey.

How a man can identify he is cursed – Leo Dasilva