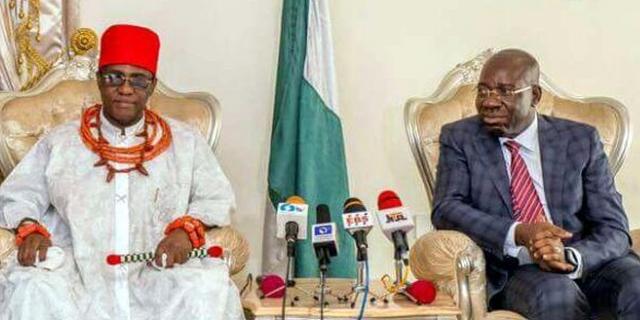 Governor of Edo State, Godwin Obaseki, on Monday secured a private audience with Oba of Benin, Omo N’ Oba N’ Edo Uku Akpolokpolo, Oba Ewuare II to deepen the discussion on the artefacts with the intent to end their rift.

The first-class monarch, last Friday at a meeting in Benin with palace chiefs on the repatriation of the artefacts, looted from Benin Kingdom in 1897, raised the alarm over attempts to divert the destination and right of custody of the stolen cultural heritage.

He emphasised that the artefacts were not the property of Edo State government or any private corporate entity, but that of the Benin kingdom.

Oba Ewuare condemned the activities of the Obaseki-backed “so-called” Legacy Restoration Trust Limited, which was incorporated in January 2020, and the “purported” establishment of the Edo Museum of West African Arts (EMOWAA).

The Oba also called on the Federal Government to take custody of the artifacts, on behalf of the palace of Benin kingdom, until the Benin Royal Museum is ready for their collection. He said that under no circumstance should the custody of the age-old artifacts be handed to any privately contrived entity like the Legacy Restoration Trust Limited

Ogie said: “The governor has consequently ordered that on no account should anyone, whether in government or acting independently, engage in disrespectful exchanges and/or altercation with our revered Royal Majesty and the Benin Royal Palace.

“The government of Edo State and the governor have always acted transparently and in consonance with existing federal and state laws in all matters relating to the proposed return of the artefacts and monuments.

“The actions of the government thus far on this issue have been driven by selfless, patriotic considerations and in the best interest of Edo State and Edo people.

“The governor of Edo State, His Excellency, Mr. Godwin Obaseki, has displayed and will continue to display immense respect for our traditional institutions and therefore will continue to make efforts to secure a private audience with His Royal Majesty (Oba of Benin) to discuss his concerns.”

Ogie said the state government has noted the media statement by the palace on the dispute.

He said: “It is concerning that the statement (by Oba of Benin) appears to have created the impression that there is a major conflict between the interests of the Edo government and His Royal Majesty, with regard to the laudable national milestone of having our highly-valued artefacts returned home to Nigeria.

“Governor Obaseki expresses his gratitude to the President of the Federal Republic of Nigeria, President Muhammadu Buhari (GCFR); the Minister of Information and Culture, Alhaji Lai Mohammed; and other officials of the federal government for their patriotic and tireless efforts that have brought us to the verge of this eagerly-anticipated achievement, which has remained elusive for over a century.”