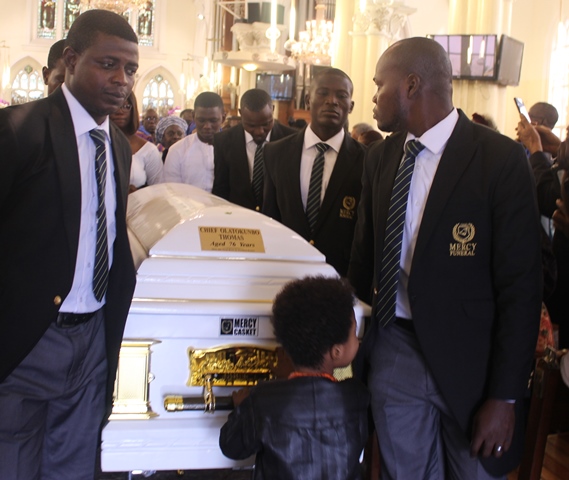 Sports enthusiasts and associates thronged the Cathedral Church of Christ in Lagos, on Thursday, to bid farewell to the former Vice-President of the Nigeria Olympic Committee, Chief Olatokunbo Thomas.

Newsmen report that Thomas, a lawyer and sports administrator was also an honorary member of the International Swimming Federation.

Speaking at the funeral service for the Bamofin of Iba, Lagos, the Rev. Canon Emmanuel Fadipe, described Thomas as a man, who made remarkable contributions in various fields of endeavor.

Quoting the bible from John 10: 17 and 18, Fadipe said that human beings should emulate Jesus Christ and make sacrifices to affect their compatriots during their time on earth.

Fadipe advised the children of the deceased to display the exemplary life lived by their father in order to leave legacies worthy of emulation.

The cleric extolled Thomas for living a life of service, citing various positions held by Thomas, who was chairman of the audit committee of Ashakacem Plc in the late 90s.

In a tribute, the wife of the deceased, Mrs Evelyn Thomas, described her husband as a loving protector, whom she could confide in at all times.

She said she was happy even in grief because her husband was happy in his last days and referred to her as a “wife of no regret’’.

Also, Mrs Vera Thomas-Dipeolu, a sister to the deceased, extolled her brother, wishing him rest in the bosom of God.

“The sound of celestial trumpets which the angels will forever blow will welcome you to paradise. Sleep on. Take your rest my beloved brother.’’

One of the children of the deceased, Miss Modupe Thomas, similarly, described her father as a gift and role model.

She said that her father had equal love for his nine children and taught them to be independent and hard working.

Thomas, who attended Baptist Academy, Lagos, Igbobi College, Lagos and the University of Lagos, Akoka was born on Aug. 5, 1943.