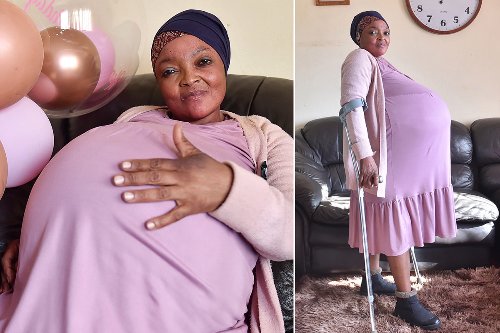 37-year-old South African woman, Gosiame Sithole broke the Guinness World Record after she gave birth to 10 babies, at once.

A decuplet is a group of 10 babies born at the same time.

According to reports, Sithole gave birth to seven boys and three girls on Monday, breaking the world record once held by Malian, Halima Cisse, who gave birth to nine children in Morocco last month.

The decuplets came through a caesarian operation even though Sithole’s husband claimed that they were conceived naturally.

The birth of the 10 babies came as a surprise to Sithole and her husband who were expecting eight babies.

Sithole gave birth to her children 29 weeks into the pregnancy, her husband, Tsotetsi, told Pretoria News on Monday night.

Tsotetsi also emphasized that his wife was not on any fertility treatment, stating that her pregnancy was natural.

“It’s seven boys and three girls. She was seven months and seven days pregnant. I am happy. I am emotional. I can’t talk much. Let’s talk again in the morning please,” an excited Tsotetsi said.

The couple already has six-year-old twins, making them parents to twelve children.

Related Topics:DecupletsSouth Africa
Up Next