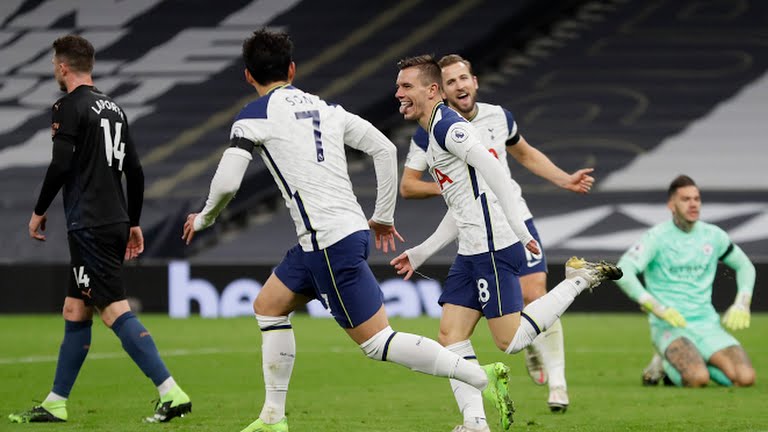 Tottenham pulled a tactical 2-0 win over Manchester City at the Tottenham Hotspur Stadium to the top of the Premier League table, ending Chelsea’s temporal lead.

Son Heung-min and Giovani Lo Celso helped Spurs as they displayed a typical Jose Mourinho’s way of doing business against a dominant Pep Guardiola side.

City had all to do to break the home side’s defence after striker, Son put Mourinho’s men ahead early in the 5th minute of the game.

Striker, Harry Kane almost made it 2-0 in the 13th-minute but the offside flag is raised against the forward ensured the game remained 1-0.

Laporte scored after an assist by Jesus but VAR called the attention of referee Mike Dean after the ball struck the arm of Jesus before the pass and the goal is disallowed.

Tottenham made it 2-0 in the second half with Lo Celso scoring with his first touch after he was picked up by a pass from Kane.

Hugo Loris pulled a brilliant save in the closing minutes to stop City from pulling one back from Dias’ header from six yards.

Spurs remain unbeaten since their opening day defeat to Carlo Ancelotti’s Everton side after nine games and lead the log with 20 points.

Mourinho’s men will lead the log ahead of the clash between Liverpool and Leicester City which will have an impact on their spot on the log.