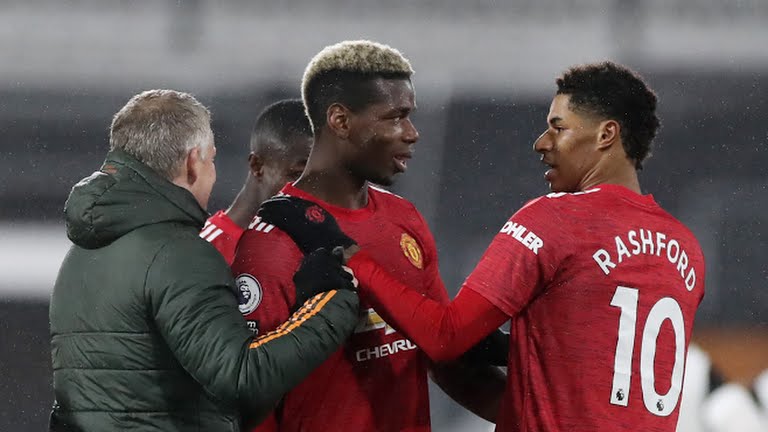 Manchester United manager, Ole Gunnar Solskjaer, says he’s “very happy” with Paul Pogba after his goal sent the Red Devils back to the top of the summit.

Edinson Cavani cancelled out Ademola Lookman’s early opener for Fulham in the first half before Pogba, who had a decent performance at the Craven Cottage, scored a classy goal to complete the comeback for Solkjaer’s men.

Recall that the Frenchman had been subjected to criticism after enduring loss of form and falling of the pecking order amidst contracting COVID-19 and transfer speculations after he and his agent, Mino Raiola, hinted at another moved away for Old Trafford.

Speaking after the game, the Norwegian said: “I’m very happy with Paul’s performance,” he said. “Sometimes impressed is a strong word, I know what he can do.

“It was all about getting Paul fit; running fit and match fit. He played central midfield, made some good runs into the box, made challenges despite getting an early yellow card, which is always dangerous. But he kept his discipline and won tackles for us.

“He does everything, we know Paul can do more or less everything that is asked of a midfielder, now he is putting all the elements together in the same performances which is great to see.”

Solskjaer added: “I would like to say so [that this is the fittest and most focused Paul Pogba].

“He’s enjoying his football, he’s very happy mentally and physically in very good shape. We know all about his talents, today we decided to play him in midfield, and it was worth it.”

Pogba has now won two matches for United with two decisive goals in the last three matches including the 1-0 win against Burnley.

Last night, United match the club-record 17-game unbeaten league away run set by their treble-winning side of 1999 and restored their two-point lead over Manchester City and Leicester City.

They have won 21 points from losing positions in the 2020-21 Premier League, more than any other side. No team has won more than this in any of the previous 7 seasons in the competition. (Sky Sports/OptaJoe)