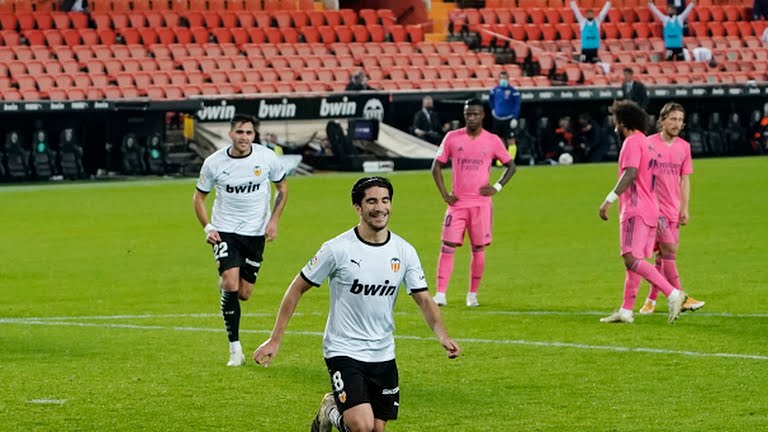 Carlos Soler bagged a hattrick from the penalty spot to help Valencia secure a 4-1 comeback victory against Real Madrid on Sunday night.

Valencia fell victim of a Karim Benzema brilliant finish in the 23rd minute as the away team got the ground rolling at the Mestalla Stadium.

A pass from Marcelo found the Frenchman on the edge of Valencia’s box and he didn’t disappoint with a missile strike that powered beyond the reach of Domenech into the top-right corner.

The home side began the comeback when a Gaya cross caught Lucas Vazquez’s arms away from his body in the Madrid box, leaving the referee with no choice but to point to the spot.

Soler began the raiding party for the home side in the 35th minute when he converted the spot-kick to level up, although he found the back of the net after a second try thanks to VAR spotting an encroachment in the first which he missed.

Madrid helped the home side with the remaining three goals courtesy three defensive errors, including the one that led to the equaliser.

Defender, Raphael Varane scored an own goal on the 43rd minute as the sent his own clearance over the line from Gomez’s cross. Courtois’ best effort was not enough to save Madrid as found its way to the back of the net to give to the home side the lead.

It was a stroll in the net from then on for Valencia as Soler was given the opportunity to get a hattrick with two more penalty kicks.

A foul on Gomez by Marcelo in the away side’s box gave the home team and Soler their second penalty and goal on the night.
The midfielder’s right-footed strike pumped beyond the reach of Courtois into the bottom-right corner to make it 3-1 in the 54th minute.
Valencia were awarded a third penalty in 62nd minute when Ramos nudge the ball away from Musah with his arm, leaving the referee with no choice but a penalty call.
Soler completed a hat-trick of penalties with a composed strike into the bottom-right corner to give the home side a 4-1 win over the defending champions.