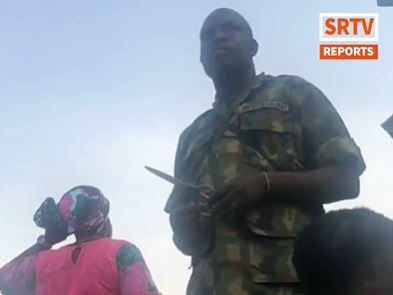 Some soldiers have been caught on camera assaulting a woman and some youths in Beere area of Ibadan, the Oyo State capital.

The military men, who were on #EndSARS duty, could be seen in the video flogging a woman for what they termed ‘indecent dressing’.

Some of the soldiers, who were chanting ‘End SARS’, also shaved the heads of some youths said to be wearing improper hairstyles.

In a video which has since gone viral, a young lady wearing a nude camisole and orange attachment is made to sit on the bare floor at a filling station while a soldier whips her buttocks.

The lady begs the soldier repeatedly  but the adamant soldier asks her not to protect her buttocks as he continues to whip her.

A young man, whose head was also shaved, narrates how he was pulled down from a commercial motorcycle by one of the soldiers.

Speaking in Yoruba, he says,

“I was on a motorcycle with my friends around Beere when I was stopped by soldiers. They said wanted to see us. I was wondering what I had done because I wasn’t in possession of any weapon and I am not a fraudster.

“They said I should take off my cap and when I did so, they flogged me and asked me to kneel down. When I asked what my crime was, he ordered me to sit down and then brought out a pair of scissors from his pocket.

“The funny thing was that they collected money from us for the haircut.”

Soldiers deployed in the streets to curb protests have been caught on camera perpetrating several acts of human rights abuse.

Last week, some men of the Nigerian Air Force in Osun State were seen flogging civilians who they had ordered to lie face down in the mud.

The air force claimed to have arrested them but such cases are usually buried.

Rights group, Amnesty International, has accused the Nigerian military of committing several acts of abuse some of which include whipping, forced haircuts and sometimes, extrajudicial killings.

VIDEO: Man found breathing after his corpse was exhumed one year after death