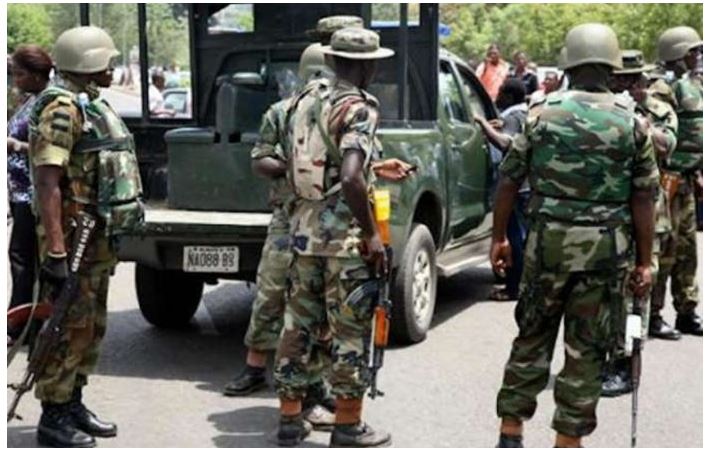 A group of soldiers on Sunday morning attacked the circulation vehicle of The Punch Newspapers, which was on its way to distribute one of its titles to the states in the South-South.

One of the vehicle’s front tyres was torn beyond repair with a knife by one of the soldiers manning Mbiama, a border town between Rivers and Bayelsa State.

It was gathered that the soldier tried getting a stick to smash the windscreen of the Passat Golf 3 car, but resorted to using a knife to destroy the tyre.

The driver of the vehicle, Sunkanmi Olusola, said the incident, happened at about 4.10 am, as the soldiers stopped The Punch and The Nation Newspapers from moving beyond Mbiama.

Sunkanmi said, “When I got to Mbiama, some soldiers there did not allow us (Punch and Nation) to pass. I made an attempt to appeal to the soldiers to allow us continue our journey, but one of them became very angry and attacked the company’s car.

“He used a knife, which he brought out from his uniform, to tear the driver side’s tyre. The soldier was trying to get a stick probably to smash the windscreen of the car, but decided to use a knife when he could not get a stick. I ran away when I noticed that he had brought out a knife.

“The tyre was destroyed beyond repair. It is a new tyre that we bought few days ago; not up to a week. I had to replace it with the car’s spare tyre. The crisis started three days ago; security officials at Mbiama would not allow us to pass and distribute papers.

“They also stopped ThisDay truck carrying newsprint from coming into the state. Yesterday (Saturday), the policemen on duty at the same spot allowed my colleague to pass, but today, the soldiers there refused to allow us to pass.”

However, efforts made by the spokesman for 6 Division of the Nigerian Army, Port Harcourt, Major Charles Ekeocha, to make the soldiers allow the drivers to circulate their newspaper proved futile.

A top security official, however, maintained that due to the closure of all boundaries, it was only the Rivers State Governor and the Commissioner of Police that could give a directive that print media organisations should be allowed to distribute their papers beyond the state boundaries.

When contacted, the state Commissioner of Police, Mr Mustapha Dandaura, said, “You know there is a task force, which has the military, police and others as members.

“If they (your circulation drivers) are ready to move, just tell me the routes they are plying, so that I will talk to the Commander there. We cannot stop newspaper firms from circulating their papers. It is not possible.”

Earlier, calls and a text message to the Secretary to the State Government, Mr Tammy Danagogo, to respond to the stoppage of newspaper circulation vehicles at Rivers boundaries with neighbouring states were not replied.

But the Special Assistant to the Rivers State Governor, on Electronic Media, Mr Simeon Nwakaundu, told our correspondent that the matter was already being addressed.