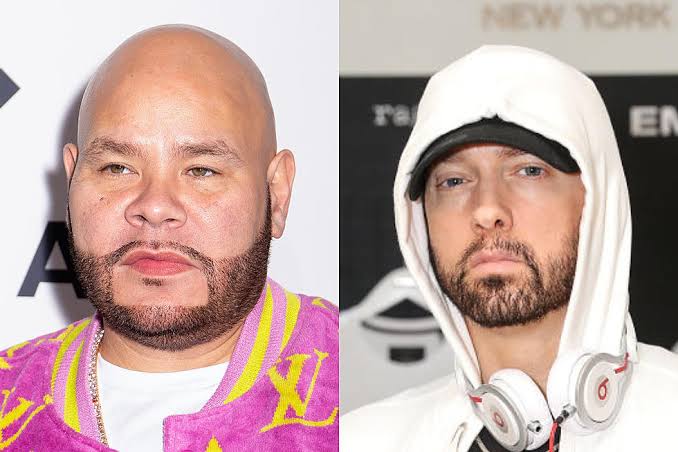 American rapper, Fat Joe, has revealed he missed the chance to sign Marshall Mathers, better known as Eminem, despite the Detroit rapper giving him his demo six times.

Fat Joe just never listened to the demos. Now he says that singular act was the biggest mistake of his life.

“What happened was Eminem out here in Miami, he gave me his demo like six different times.

“And everywhere I went there was this little White boy and he kept giving me his demo he was like ‘yo listen to my music, I am telling you, I am nice, I’m nice, I’m nice.’ And I never really, I didn’t do it, and now he is the biggest guy in the universe. ”

The Terror Squad head honcho doubled down on his statement on social media and says that was the biggest mistake of his life.

During #JAMZLive, Fat Joe tells @supacindy and @dj_entice about the time Eminem tried to give Joe his demo tape. Joe says that he never listened to it back then. Now, he reflects on passing on one of the biggest rap artists in the world. Watch the entire interview on our YouTube channel now! #JAMZLiveFatJoe #FamilyTies #WEDR #99JAMZ

Elsewhere in the interview, he remembered having a similar experience with Rick Ross and being instrumental in Pitbull getting signed.

Fat Joe recently had the Internet going crazy when he reminded the entire Latin community of their origin.

“Let’s speak about Latinos not being Black,” Joe said in a September interview with Hot 97’s Ebro on the Morning.

“Latinos are Black. In Cuba, at one time, there was 8 million Cubans. 5 million, unfortunately, were slaves. 3 million were actual Cubans, and they integrated and had babies. Same thing with Puerto Rico when you go to Loíza. And when you talk about Santeria, that came from the motherland, Africa.

“Sometimes, Latinos may even identify themselves with African and Black culture more than Black people. This ain’t no crazy thing. Fat Joe ain’t on crack. He knows what he talking about.”

Xenophobia: Rapper AKA dares Burna Boy as he is set to headline concert in South Africa