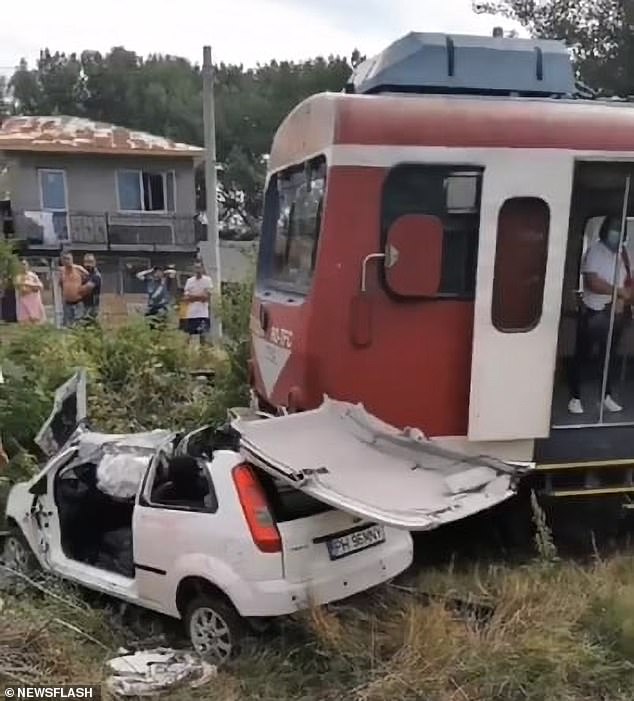 A singer was hit by a train and killed while live-streaming himself listening to loud music in his car on a Romanian railway crossing.

Footage captures Tavy Pustiu, 29, dancing to pop-folk ‘manele’ music as he approaches a level crossing in Ploiesti with his wife behind the wheel.

In the clip, the woman, 24, can be seen looking left and right as she approaches the crossing – but she clearly fails to spot the speeding locomotive.

Moments later, Mr Pustiu lets out a terrified shout as he notices the train racing towards the car.

The train ploughed into the side of the white Ford Fiesta, ripping the roof off the vehicle and destroying the passenger side where the musician had been sat.

Images from the aftermath also show how both airbags activated in the impact and the windshield was completely crumpled.

Authorities in Prahova County confirmed Mr Pustiu was killed in the accident while his wife, who was not named, remains in a critical condition.

She is said to be fighting for her life at Prahova County Hospital.

In a statement, police said:

“As a result of a collision between a train and a car on the level crossing a 29-year-old man who was the passenger in the front of the car was declared dead and a 24-year-old woman who was the driver was injured.

The train had been travelling from Maneciu and Ploiesti Sud ahead of the accident and authorities said it was complicated for firemen to remove the pair from the wreckage.

The incident caused several hours of delays in road and rail traffic.

Tragically, only a month before his death, the singer had posted a message to Facebook saying:

“One day, the wrong train will take you to the right destination.”

Girl, 6, raped, tortured and bludgeoned to death with stone in Pakistan (Graphic photo)