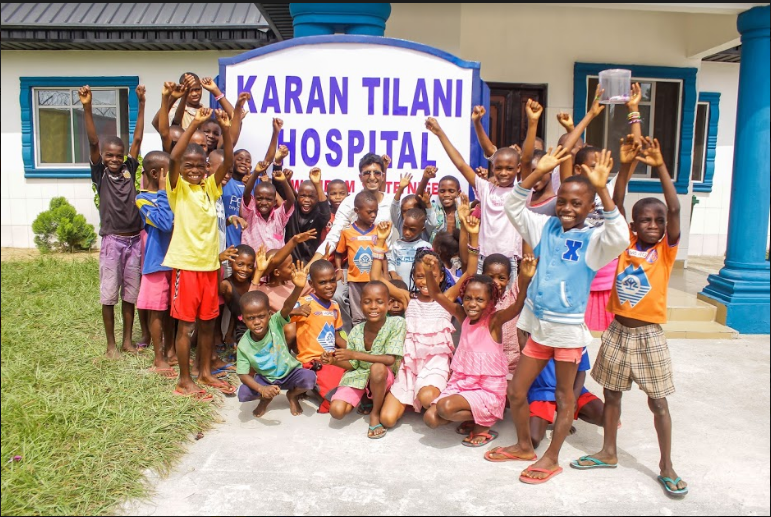 Karan Tilani! The name may not ring a bell, you may not have heard about him because he is not the richest man in the world or in Asia, but he has a rich heart just like Aliko Dangote, Bill Gates and Mark Zuckerberg.

His heart is so rich that he left his comfort zone in Singapore and Russia where he sits atop a diamond company to support vulnerable children in Nigeria.

Not everyone with a fat pocket will ever sign on to the philanthropic commitment, if it is so, Jeff Bezos would be competing with Bill Gates to be the number one giver in the world and not just outrunning the latter as the richest.

WuzupNigeria reported earlier about a Singaporean couple who paid over N700 million for ‘world’s most expensive dinner’ to save some Nigerian children condemned to death by their family for allegedly being witches. Karan Tilani, also a Singaporean, is the curator of the dinner that would be saving lives and moulding the future of thousands of kids in the most populous black nation.

This practice of condemning little children to death over allegations of being witches is prevalent in two South-South states:  Akwa Ibom and Cross Rivers.

There have been several reports of children and even babies being beaten to death, buried alive and set ablaze. Their crime? They were labelled witches. It is almost impossible for a kid to escape death in these states once he/she is accused of being a witch.

Many of these stories don’t make it to the media because locals see the practice as a norm. The law enforcement agencies also seem to be helpless in curtailing the ‘child witch’ phenomenon. The few locals who outrightly oppose it are making efforts to draw attention to this barbaric act and get help for the kids who have been stigmatized over false accusations. Many didn’t live to tell the stories, but the few who have been rescued have shared their gory tales.

It is the story of Mary and Ekong, two little children who were found in the bushes in Akwa Ibom in 2014, almost naked with burns all over their bodies. It was gathered that someone had tried to burn them alive before they were rescued by David Emmanuel Umem, the co-Founder of African Children’s Aid Education and Development Foundation.

David and his team rescued the children and they were both hospitalized for weeks. At age nine, Mary had been sexually abused and was diagnosed with syphilis and gonorrhoea.

Such is the heartrending story of Nigerian kids accused of witchcraft and left in the throes of death.

There is also the story of Saviour as well as three siblings – Grace, Victoria and William – who were locked in a room and forced to eat their own vomit by their uncle, who allegedly killed their father. They were said to have witnessed their dad and were traumatized when David and Anja came to rescue them.

Saviour before and after

How can we forget the story of Hope whose pitiable state broke the internet in 2016 after his photo with Danish caregiver Anja Ringgren Lovén emerged on the internet?

Hope was left for certain death when Anja who operates a Danish NGO DINNødhjælp encountered him. Four years after, he is living healthily. Many do not know there is a hand behind the scene giving huge support to the charity works of Anja and the transformation of the kids, thereby giving them a fillip to live again.

The curator of the ‘World’s Most Exclusive Dinner’, Karan Tilani spoke with WuzupNigeria on his plans for Nigerian kids and why he took a special interest in them despite the many negative reports he has heard about the country.

Tilani is building a 40-bed hospital in Akwa-Ibom and in partnership with DINNødhjælp and the state government. He plans to supply 20,000 vaccines of Prevnar 13 pneumonia vaccines, which he said costs between N30,000 and N35,000, that will be administered to 20,000 children.

The Karan Tilani Hospital located within the premises of the Land of Hope run by DINNødhjælp is expected to save 500 children every month and over 6,000 children annually.

The NGO signed an MoU with the Akwa Ibom state government for the supply of the vaccines which will also be funded with proceeds from the ‘World’s Most Exclusive Dinner’ recently paid for by a Singaporean couple, Vincent and Jane Hee.

According to information on children philanthropy website, Karan is a director in his family business, World of Diamonds Group, which is almost fully integrated in diamond mining, polishing and distribution. He oversees partnerships and marketing for the Group and always looks to benefit social causes with ultra-luxury projects. Having worked with prominent personalities for non-profit missions, he believes that there should be greater equality in the world.

“As a priority, most of the resources including our time is now spent on the vaccination programme, after which, we will focus more on the Karan Tilani Hospital. Purchasing 20,000 vaccines of Prevnar 13 vaccines will impact 20,000 children (an average of 1 dose per child is sufficient given the effectiveness of the vaccines). These 20,000 children would most probably lose their lives through pneumonia, if not for our effort. The vaccines are manufactured by Pfizer, one of the largest pharmaceutical companies in the world and we are working together with their local distributor, Worldwide Commercial Ventures Limited,” he said.

“At its full capacity, there will be three paediatricians, and one of the doctors would also be a surgeon. There will be 12 nurses in the hospital that will be deployed in different wards, along with a pharmacist and laboratory technician. Once fully ready, the hospital will have approximately 40 beds in a very comfortable arrangement (four beds per ward), as we believe in dignifying the children and providing them with the level of care that they deserve.

“There are also other wards such as the Accident & Emergency (A&E) ward and operating theatre which shall treat more children. With an average of each child staying for a week in the hospital, and with many kids not requiring hospitalization but mainly outpatient treatments, the hospital can save over 500 children every month, which equals over 6,000 children annually.”

Why he chose Nigeria?

“Yes, I mentioned that Nigeria is famous for scams and internet fraud. Being born in Singapore, it is the safest place in the world and I think this is a great blessing. I wanted to offer to the poorest parts of the world help, and I believe in taking challenges in life, so I took on the mission to help Nigeria.

“According to the most recent UNICEF report published in November 2019 (https://unicef.org/press-releases/one-child-dies-pneumonia-every-39-seconds-agencies-warn…), pneumonia claimed the lives of more than 800,000 children under the age of five in 2018, or one child every 39 seconds. Nigerian children made up the highest number of those who died from pneumonia, an estimated 162,000 deaths in 2018 – this is about 1 child death every 3 minutes. Pneumonia is a deadly disease and takes so many children’s lives – even though this is mostly preventable.”

On plans to extend the initiative beyond Akwa-Ibom State:

“Besides Lagos, the only other state now that will receive free medical treatment to cure pneumonia is the Akwa Ibom state. As a gauge, in Akwa Ibom in Nigeria, a dose of Prevnar 13 vaccine costs between 30,000 and 35,000 Nigerian Naira, which is about USD 82 – USD 95 a dose. That cost excludes transportation, cold storage logistics, and administering the vaccines (including hiring and training of doctors & nurses).

“At the moment, we have secured 6,000 vaccines that have just arrived in Akwa Ibom and is being kept in the cold storage facilities. Funds have been dispatched to DINNødhjælp and its sister company ACAEDF (African Children’s Aid Education and Development Foundation). ACAEDF has a MOU implemented with the Ministry of Health, Akwa Ibom State Government (AKSG), where AKSG will provide and make available facilities to aid in the logistics of the vaccination programme (cold storage), security of the vaccines, and identifying targeted areas who would be beneficiaries of the vaccination programme.

“The entire vaccination programme, with the aid of the AKSG, is solely funded through the proceeds from the world’s most exclusive dinner and has extended to my personal commitment, and there is no governmental funding in this process.”

“Hopefully, I can extend this vaccination initiative to other parts of Nigeria in the future. I am a strong believer of education because it is the way out of poverty. But saving the kids, giving them access to healthcare, love and nutrition, is the first and crucial phase before a child starts schooling. The brain can only develop with the right nutrition and if there are children lying on the streets naked, completely deprived of resources because they have been accused of being a witch, the priority is to save that life, and then teaching that child how he can make an impact to the others around him in future.

“I am a strong believer in sustainability and therefore I utilize most of my resources toward children, as they are highly vulnerable, if we transform a child’s life and increase his/her standard of living exponentially, the child will remember it and is likely to pay it forward in the future. In the future, I am also looking to work more on climate change. The Obamas were in Singapore in December 2019 and I had a chance to speak with Michelle, she was hugely inspiring and I love her optimism on progress around humanity.”

Another thing quite fascinating about the Singaporean philanthropist is that since making an inroad into Africa for the sake of Nigerian children, Tilani has been silently adding value to the lives of the kids without the prying eye of the locals.

MORE READING!  My mother prayed about my anger issues for 15 years ― Keppy Ekpenyong

Tilani also hinted WuzupNigeria of his plan to delve into climate change advocacy. This, he said, was part of his discussion with Michelle Obama last December when she visited Singapore with her husband former President Barack Obama.

I see beauty in everything and try to capture the essence – Professional photographer, Uddy Samuel