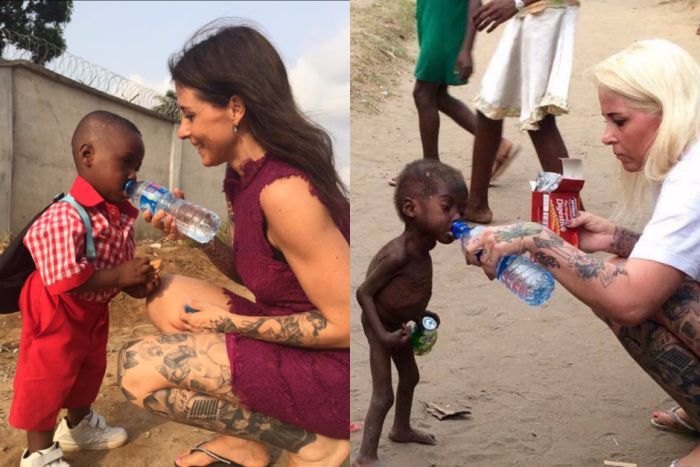 A Singaporean couple is plying a ‘road less travelled’ to bring succour to the faces of some Nigerian children accused of witchcraft and condemned to death by their families.

According to CNALuxury, Vincent and Jane Hee are shelling out S$2.7 million (N717.9 million) on what has been described as as “The World’s Most Expensive Dinner” curated by the director of Russian diamond company World of Diamonds, Karan Tilani.

During the three-day period of the dinner, the couple would be chauffeured in a Rolls-Royce car to an 18-course dinner by chef Kirk Westaway of Jaan on board a Bombardier Global 6000 private jet, a cruise on a luxury yacht, a night at the Outpost Hotel in a room with 10,000 roses, and another night at the Presidential Suite of Raffles Hotel.

At the dinner, they will be presented with two pairs of diamond-encrusted chopsticks, along with a rare 2.08-carat cushion-cut fancy vivid blue diamond ring. The ring is named after former Bond girl and Dr Quinn, Medicine Woman, actress Jane Seymour.

The proceeds of the dinner would be donated to a Danish NGO DINNødhjælp which operates Land of Hope, a children’s centre in South-South Nigeria that houses children accused by their own families of witchcraft.

Remember the Danish caregiver Anja Ringgren Lovén who became an internet sensation after rescuing a starving Nigerian toddler who was disowned and condemned to death by his family for being a witch? She and her husband, David Emmanuel Umem, founded the NGO that would be receiving the donation from the Singaporean couple.

Anja came to international prominence following her encounter with the toddler who was walking naked through the dusty streets and so weak he could barely stand. She rescued him and named him Hope, which she said was meant to give him the strength to recover.

Photo of Anja giving the malnourished boy water and biscuits on the street went viral in 2016. A year later, she shared an updated photo of the Hope now looking healthy and enrolled in a school. The new photo also went viral on social media attracting applause from the global community.

In 2018, she also announced that she has teamed up with her Nigerian husband and co-Founder of African Children’s Aid Education and Development Foundation,  to build what they both call a “safe haven” for children like Hope.

In a post on her Facebook page in 2018, Anja had said her motive for building the edifice was “to create a safe environment for children who were tortured and abused because of superstition. We worked so hard everyday for many years to fulfill our dream.”

Her charity work has attracted the attention of the Singaporean couple who is going all out to make huge donations to support the NGO’s mission in Nigeria.

Speaking to CNA Luxury at Tilani’s residence prior to the start of their three-day luxury rendezvous, Vincent, a former engineer and director of Charis Montessori Preschool in Singapore, shared that while he has yet to travel to Nigeria to visit and interact with the children of Land of Hope, video clips depicting their plight, shown to him by Tilani, were enough to move him to part ways with S$2.7 million.

“Initially I did not know about this problem of the witch-children. I’ve never heard about this. But when Karan shared the video clips with me, I was sad to see it,” said Vincent.

The cause was chosen by Tilani, who claimed that “everything is going to save the kids”.

“We are looking at purchasing a total of 20,000 vaccines. These vaccines are pneumococcal vaccines to combat pneumonia,” said Tilani.

He sees channelling the proceeds to a Nigerian charity as a means to “do something different”.

“When you think of Nigeria, it is a very negative connotation. You think of scams, you think of cheating. Maybe we have received in our lifetime an email from a Nigerian prince asking for our bank details,” he admitted. “But people want to give back. As human beings, we are compassionate.”

The couple will be gifted a pair of diamond encrusted chopsticks. (Photo: World of Diamonds)

LASEMA records 20 victims, including 15 who were severely burnt, in Ketu fire incident

Ooni, the only monarch with the seal of Oduduwa – Gani Adams